Archbishop Viganò Addresses the March For Catholics (Our Warpath/YT):

The President of Our Warpath, Joseph Rigi, invited me to speak at this first National March for Catholics, organized on the feast of St. Michael the Archangel – which the Church celebrates on September 29 – to gather under the banner of the Cross the army of those who, by virtue of the sacrament of Confirmation, have become soldiers of Christ. May all of you therefore receive my greetings, my encouragement and the assurance of my prayers.

In a society that has neither ideals nor the capacity to fight for anything, in which the hypocritical pacifism of those who are cowardly surrenders its weapons in the face of the violence of the tyrant, you are called, as true Catholics, to bear witness to the Gospel and to show the world that Kingdom of Heaven which is conquered by the heroism of virtue and by love of God and neighbor. Hold in your hands that Rosary that some consider a symbol of “religious radicalism,” thereby seeking to disarm you and weaken your defense. But it is precisely this fear of the Holy Rosary that must lead us to hold on to it with even greater conviction.

Behold, they are finally here. Behold, they have finally come out into the open, the proponents of the universal Masonic brotherhood, to spew their hatred for the Most Holy Rosary, which in the prayer to the Virgin of Pompeii we call a “tower of salvation in the assaults of hell, safe harbor in the common shipwreck.” And it could not be otherwise: in a war involving the spiritual and material worlds, we have the confirmation once again that what lays behind the globalist mirage is the tyranny of Satan and his satellites.

“The State is secular,” they say. As if it were possible for contemporary man to deny God’s authority and refuse to submit individuals, families, societies, and nations to His Lordship. But this State, which calls itself secular, is in reality irreligious and ungodly, because while it chooses to profess atheism or religious indifference, it in fact offends the Divine Majesty by lowering Him to the level of idols and superstitions; it does violence to the Truth, placing it on the same level as lies and error; it maliciously deceives people, making them believe that we can be observant in private and secular in public without denying the One who created us not to “realize ourselves” or “walk together,” but to worship, serve, give glory to, and obey our Creator and Redeemer, to Whom each of us belongs and without Whom we would not have been created and saved.

This ungodly and anti-Catholic “secular State” does not consider the prayer of the Holy Rosary as a “papist superstition” – these are the generic accusations of anti-clericals and “free thinkers” – but as a real weapon whose power terrifies them. It hates the Catholic Mass, but not its conciliar parody. It hates Catholic doctrine, but not the “magisterium” of Santa Marta. It hates Catholic morality, but praises Bergoglio for his interventions in favor of sodomy, climate and immigration. It hates prayer, and in particular the Rosary, which places at the head of our small formation Our Lady under her title of Nikopéia, She who is the Bearer of Victories, the One who – invoked by Christianity as Queen of the Holy Rosary – allowed the fleet of Lepanto to defeat the followers of Muhammad. This “secular state,” which is secular in name only, but in reality is intrinsically rebellious to Our Lord, knows what the supernatural power of grace is, what the power of prayer and fasting is, and it knows the infinite value of the Holy Sacrifice of the Mass. This is why it wants to prevent any public manifestation of religion, and to brand as extremists – “radical traditionalists” – Catholics who wield the invincible weapon of the Rosary or who kneel before God but do not kneel for Black Lives Matter. It is no surprise that the servants of the enemy share with him this furious aversion to the Holy Rosary: every Hail Mary that ascends to Heaven to honor the Mother of God and asks Her to intercede “for us sinners,” adds a dart to the quivers of the Angels and crumbles the precarious power of the Prince of this world, who is in reality a usurping prince who appropriates the civil and ecclesiastical authority by means of deception, knowing well that his end is near and his tyranny is close to defeat.

The world of the Great Reset and the Agenda 2030, the world of Davos and the UN, the world of the WHO and usurious finance seem to have won. After the resignation of Benedict XVI and the electoral fraud of the American presidential elections, two figures of the katèchon were missing, the former a spiritual authority and the latter a temporal authority which could oppose the advent of the Antichrist. In their place were installed two people who are totally irreconcilable with the role they play – to use a euphemism – one chosen by the St. Gallen Mafia and the other by the American deep state and the elite of the New World Order. They are also united by their choice of corrupt and perverted friends and collaborators. The Catholic Church is eclipsed today by the deep church and the United States are eclipsed by the deep state. Both use their authority against the purpose for which they have been instituted: the salus animarum for the Church and the bonum commune for the State. And we find the leaders of the State and the Church significantly allied in the destruction of both: they meet, praise, buy and sell each other, and prostitute themselves to the elite in the hope of not being wiped out when they are no longer needed. And to show that they are devoted to the globalist Leviathan, they destroy everything that recalls the society born of Christian civilization.

We are the “control group” of the traditional world in a globalist society, just as those non-subjected to gene serum are the “control group” that disavows the pandemic narrative. What is the control group? It is a group of subjects who, during an experiment, are kept in the same conditions as those under examination, but do not undergo the treatment that is the subject of the trial. The function of the “control group” is to exclude alternative explanations of the results and to ensure that the data from the experimental group are actually due to the variable being tested and not to unknown external influences.

This is why they want to cancel us, make us invisible, and censor us. Our very existence is a point of comparison that reveals fraud and denounces its culprits. Resist, then: as Catholics and as Americans! Resist as you did by refusing mandatory vaccination, because your state of health, the fact that you do not suffer from myocarditis, that you have not been made sterile, and that you do not suffer from sudden illnesses, is evidence of the correlation between the inoculation of the experimental serum and the adverse effects.

The Bergoglian Sanhedrin and the public authority are once again in agreement in sending Our Lord to death, for the same “crime” as they did long ago: for having declared His Kingship. Those who recognize Jesus Christ as King are enemies of the deep state and the deep church, since both of these refuse to submit to His empire and obey His Law, and they know full well that where Christ reigns, there is no room for either bad shepherds or bad rulers.

At the end of the Holy Mass, after the Last Gospel, the prayer is recited to St. Michael, invoking him as “Prince of the Heavenly Host” and begging him to drive back to Hell Satan and the other evil spirits who prowl about the world seeking the ruin of souls. In the prayer that precedes it, the priest asks for the intervention of God pro libertate et exsaltatione Sanctæ Matris Ecclesiæ, for the freedom and triumph of Holy Mother Church. For this reason we pray to the glorious Archangel; for this reason we venerate the Mother of God with the prayer of the Holy Rosary and with pious devotions; for this reason priests celebrate Holy Mass every day, pouring out on this misguided world the infinite Graces of the Passion of Our Lord.

Americans! American Catholics! If the civil law recognizes the right to defend your homeland with weapons, the law of the Lord requires you to fight this epochal battle with the spiritual weapons that the Holy Church makes available to you: an inexhaustible arsenal. Take up the Holy Rosary, kneel down – you too, men and children! – and show your strength, your courage, and your honor as Christians by praying. It will not be our human forces that will overcome the enemy, but the tremendous phalanx of the Angels and Saints, behind the banner of the Cross held by the Archangel Michael and under the protection of the Virgin who is Auxilium Christianorum, Help of Christians. We are only asked to choose what side we are on and to fulfil our duty according to our state.

Pray, do penance, fast. Live in the Grace of God by confessing your sins often and receiving Holy Communion. Never stop keeping yourselves closely bound to Our Lady by means of the Holy Rosary: if in the past Europe was saved from the Muslim invasion thanks to this prayer, the world will be saved all the more, if the simple and holy words of the Hail Mary continue to rise to Heaven from every part of the earth.

I bless you all.

Prayer is power! How to pray the Rosary
Wooden rosaries available here. 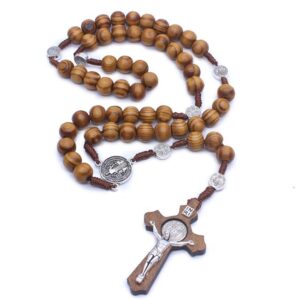