The following is an excerpt from the book Global Conspiracy, by Hugh Williams, available at St Edward’s Press Ltd. To order the book, please visit the publisher’s website here.

Climate Change is another of the three biggest frauds being perpetrated in the world today. Here is a resumé of what William Happer had to say about Climate Change at Hillsdale College, Phoenix, Arizona on 24th February 2021. Some additional information has been gleaned from the writings of Chris Morrison and others.

First of all, the science

1. Carbon Dioxide makes a vital contribution to our lives and economy. It is not a poisonous gas.
2. There is real air pollution. The pollution in China’s cities, like Shanghai, is due to burning stubble. It has nothing to do with CO2.
3. CO2 is not a pollutant at all. We each exhale about two pounds of CO2 per day and it constitutes about 4% of what we breathe out.
4. The earth is heated by the sun shining on the tropics and it then cools by radiating that heat out into space. Doing anything to alter this natural process achieves nothing in terms of controlling the levels of CO2.
5. CO2 helps to keep the earth at an even temperature because it, with water vapour, holds the earth’s heat. If it were not for these two, the earth would be an ice cube.
6. CO2 levels are never stable. If you put a CO2 meter in any place you can watch the way the levels of CO2 vary between say 300 and 1000 parts per million on any given day. It is therefore nonsense to say that, with these constant oscillations, CO2 levels are going up.
7. Doubling CO2 would make very little difference to the constitution of the atmosphere– a little less than 1%.
8. The predicted warming calculated by the Climate Change fanatics (supposedly caused by CO2) is much larger than what has been actually observed by balloons and satellites. In other words the models that the Climate Change scientists simply do not work; but nobody is prepared to admit this. However, the data from the balloons and satellites do agree with each other, that there is no warming.
9. There may, or may not, be a recent history of increased temperatures on earth but those measurements have been taken on the earth’s surface, and often in places that one can well imagine would be hot, as in car parks or on roof buildings. However, and to repeat, temperatures measured by balloons and from space show no increase in temperature.
10. What warming there has been has been beneficial. Increased CO2 is good news because, right now, we are living in a CO2 famine. CO2 levels in the past were far greater than today – twenty times greater – and, when it was at this higher level, life seems to have flourished better than today.
11. The earth is actually getting greener. West Australia is greening. So too western India, Sub Saharan Africa, western USA. They are all greener than they were twenty years ago.
12. The more CO2 you give a plant, the better it grows.
13. The holes in leaves are to let CO2 enter the leaf. Once inside, it combines with water to make sugar, and sunlight provides the energy, after which oxygen is released – a gas that we simply cannot live without.
14. In short, CO2 benefits the world.
15. The biggest source of human-caused CO2 is from vehicle emissions and cement manufacture.
16. Solar activity is beginning to decrease. We had a cooling period in the 1970s. Records tend to indicate that we may be entering a similar period now.
17. On a related matter: Sea levels are rising because rivers carry sediments into the sea in the form of mud. One can do nothing to stop that happening. Sea levels rise at nine inches a century. Trying to control CO2 will have no effect on sea levels.
18. The increase in CO2 is blamed for an apparent increase in earth temperatures, whereas the truth is the other way around. Increases in earth temperatures are followed by increases in CO2.
19. For example, we are told that manmade climate change is creating worse weather in terms of an increased number of storms but if one takes the rainfall in Wales, it has not changed for well over 100 years.
20. Sea temperatures at the Great Barrier Reef have not changed.
An 1871 dataset of sea temperatures across the Great Barrier Reef in Australia has been compared to recent measurements logged at the same reef areas. No differences in temperature were found by Dr. Bill Johnson, leading him to conclude: “Alarming claims that the East Australian Current has warmed due to global warming are therefore without foundation.”
21. In October 2020, the BBC reported that the Great Barrier Reef had lost half of its coral since 1995, citing a report that said it was due to “warmer seas driven by climate change”. But Professor Peter Ridd, who has spent 40 years observing the reef, noted recently that it was in robust good health. Coral growth rates have if anything “increased over the last 100 years”.
22. There have been 140 published papers casting doubt on the dominant role that CO2 is said to play in global atmospheric temperatures but do we ever hear of them?
23. The University of Massachusetts says that the CO2 released by humans between 1750 and 2018 was much too low to cause global warming.
24. The earth has warmed by about 1o since the end of the little ice age in about 1850.
25. The oceans hold vast reserves of CO2 and any natural warming is likely to release some of it into the atmosphere.

In short, there is nothing we should do about climate change!

1. Happer is convinced that there is a Deep State driving a deliberately false agenda because there is no climate emergency. For example, there is now to be introduced in the US legislation mandating the declaration of a national climate emergency to prepare for this climate crisis but there is no climate crisis
2. At the state level, plans have been proposed that will “break the will” of the people who deny that there is a climate crisis.
3. This is how things are. Power corrupts science. Climate fanatics don’t care about the science.
4. When you raise this issue, you are told that 97% of the world science disagrees with you but arguing like that is illogical. What matters is not opinion, but fact. In science today, decisions are based on computer models that don’t work.
5. So many people are scared because they have been brainwashed. Children are getting an incessant barrage of propaganda that the world will end because their fathers are driving SUVs. They can’t sleep at night for worry.
Greta Thunberg is the great granddaughter of a Swedish chemist who said that CO2 is a good thing! She is conveniently oblivious of the fact that Sweden is enjoying higher forestry yields than it was twenty years ago partly because of increased CO2.
6. In 2006, the BBC held a seminar on climate change and decided to make their reports on this matter more partisan.
7. In 2022, $8 million has been given to organisations like the BBC and the Guardian from the likes of Bill Gates with the result that criticism of the theory that man causes global warming will be banned from the mainstream media. Any reports of dissent from this view will be dismissed as being insignificant.
8. The so-called 97% (possibly 90%) of scientists who all “agree” that humans cause climate change is bunk. Of the 12,000 reports just 0.5% or 65 papers suggested that humans are responsible.
9. De-carbonising, as well as being pointless and ineffective will be unbelievably costly. It will also make our industries unable to compete with overseas rivals.
10. This scare started when Michael Mann of Penn State University produced his infamous hockey-stick graph which deliberately removed the mediaeval warming period and subsequent little ice age.
11. Arctic ice is not retreating, let alone rapidly vanishing. In March 2022 (March is the month with the annual maximum extent of sea ice), the ice in the Arctic Ocean covered very nearly the same size as the 1991-2020 average, and well above the 2012 low point.

1. If there is any warming, it’s caused by the sun.
2. The data shows that rather than rising CO2 causing increased earth temperatures, it is the increased temperatures that cause rising CO2, a conclusion echoed by two scientists quoted by Chris Morrison in the Daily Sceptic on 11th June 2022.
3. Climate catastrophists have registered forty years of wrong, and usually ludicrously high, forecasts.
4. Net Zero is not based on settled science.
5. There has been no global warming between 2015 and 2022.
6. Nothing that western governments have done has halted the rise in CO2.
7. No one believes that what the UK has done in terms of greening its environment to reduce CO2 has achieved anything. If they did, they would adopt the same mad policies.
8. Even when people agree about something in science, they are not guaranteed to be right. Wegener was ridiculed for his view about continental drift, but he has since been proved right.

And so, and to repeat, we should all do nothing about CO2 emissions.

Key points made by Anthony Watts and James Taylor in their Climate at a Glance for Teachers and Students:

1. Crop yields set new records each year.
2. There are now fewer droughts than there were.
3. Climate change does not impact flooding.
4. The snowpack in the northern USA covers the same area as it did in the late 1960s.
5. Coral reefs are thriving, due to the slight increase in sea temperatures.
6. Greenland’s current ice loss is miniscule.
7. Pacific islands are increasing in size.
8. Oceans benefit from increased CO2
9. Ocean currents are speeding up, not slowing down as predicted.
10. There has been no increase in the number of hurricanes.
11. The same can be said about tornadoes.
12. Temperature rises have been falsified by placing measuring sites in car parks – i.e. surrounded by concrete, so no wonder their readings have been high! Satellite readings show that there has been no global warming recently.
13. There have been fewer heatwaves.
14. There has been no warming in the USA since 2005.
15. There have been fewer wildfires.
16. The predictions of islands disappearing have not been fulfilled.
17. The Covid lockdowns, while they may have reduced CO2 emissions, have not affected CO2 levels in the atmosphere.
18. Animal farming has no effect on greenhouse gas emissions.
19. Polar bear numbers have increased recently.
20. Climate change policies and climate activism pose a significant threat to national security. 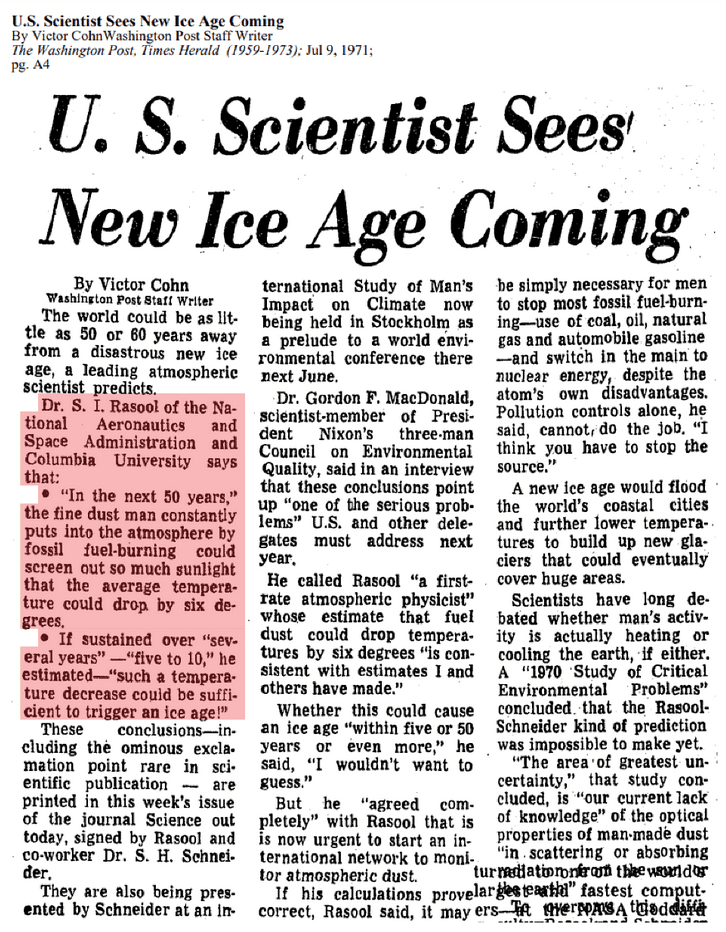