I am increasingly concerned that what is happening in Ukraine is being used as an excuse to build up enthusiasm for World War III. The conspirators are working hard to push the collaborating public (brains softened by too many months of mask wearing and too many toxic injections) into demanding a war against Russia.

In the same way that Germany’s invasion of Poland led to World War II, so it is looking more and more possible that Russia’s invasion of Ukraine could be used as an excuse for the conspirators to start World War III.

There is no longer any doubt that NATO deliberately pushed Russia into invading Ukraine. Nor is there any doubt that this is not, by far, the most egregious military activity occurring at the moment. The wars in Yemen and Syria have killed far more people but have aroused little or no interest among Western politicians or journalists.

I don’t think anyone who has studied the evidence would disagree with the conclusion that Russia was inspired to invade Ukraine in order to help further the plans of those behind the Great Reset.

The food, fuel and fertiliser shortages which are a direct result of the orchestrated invasion will wreck the global economy and force up inflation, prices and interest rates.

But the real cost will be felt in Africa and Asia where hundreds of millions will die of starvation in the coming months. It would be naïve to think that this was anything other than deliberate genocide. I have previously suggested, quite seriously, that Biden, Johnson and others responsible for the deadly sanctions should be treated as war criminals.

A few weeks ago I thought it somewhere between unlikely and impossible for the fighting in Ukraine to spread into the rest of Europe and lead us into World War III. I thought that even the most aggressive, war-loving collaborators would baulk as food and fuel prices rose.

The people who have been brainwashed into demanding a greater war have been manipulated and do not realise that they are being used. They are the same people who fell for the recycling myth even though, in the past, the media has repeatedly reported that Britain’s recycling rubbish is sent overseas to be burnt or dumped. They’re the people who fell for the global warming myth. They’re the people who accepted the toxic, experimental jabs with unfettered enthusiasm. These people have been moulded and trained and turned into gullible compliant servants of the Great Reset conspiracy.

Now, I think the risk of World War III developing is increasing rapidly and will soon be somewhere between likely and inevitable.

Look at what is happening.

The British Government has reportedly sent arms and troops (described, inevitably, as advisors) into Ukraine, thereby involving Britain in the conflict.

The public is being encouraged to support Ukraine. Under the guidance of the conspirators, the media is constantly reporting on atrocities (which may or may not have happened) and encouraging the public to call for more Western involvement.

Individual Russian citizens (who may not have committed any crimes, let alone been involved in the invasion of Ukraine) are being hounded and punished. Sportsmen and musicians who happen to be Russian are being denied the opportunity to ply their trades simply because they carry Russian passports. Businessmen are seeing their property taken from them – simply because of their citizenship.

And there is no doubt that the war is being used by Johnson and the Conservative Party to help distract from the fact that the Prime Minister, Johnson, and the Chancellor of the Exchequer, Sunak, lied to the British people and to Parliament about their behaviour during the lockdowns. In a way, their behaviour was explicable, of course. They knew that there was no pandemic and that the lockdowns were entirely unnecessary. But that doesn’t alter the fact that they, and a vast variety of public servants, simply ignored the laws they had created.

Johnson and Sunak are now both proven to be criminals, liars and hypocrites. Neither is fit to hold any public office. But neither has the decency to resign. These are bad people, surviving in a cess pool.

Johnson, in particular, seems to me to be using the war to distract from his blatant criminality.

Arguing that this is not a time to change leaders is blatant nonsense. The French are currently holding elections. Britain changed leaders at the very outset of World War II.

Is there anyone who doesn’t believe that Johnson would welcome the chance to push us further into the conflict – whatever the cost – to save himself?

The conspirators who have controlled the world for the last two years, and whose publicly avowed aims include genocide, digital enslavement and a world government appear now to be pushing the public into demanding that Britain, America and other countries become directly involved in the conflict in Ukraine.

Will China become involved in support of Russia? Will China use the war as an excuse to take Taiwan? What will happen in the Middle East? These are bad times, orchestrated and conducted by evil conspirators.

The only certainty is that the conspirators are in control. And the innocent stooges who wear, wave or fly their little flags in support of Ukraine are playing into their hands.

The conspirators created this conflict. And it is becoming increasingly clear that they aren’t finished with it.

Two months ago, World War III was nigh on impossible.

Today, you’d have to be very naïve not to realise that World War III is part of their plan. And if World War III starts then there will be no rules. 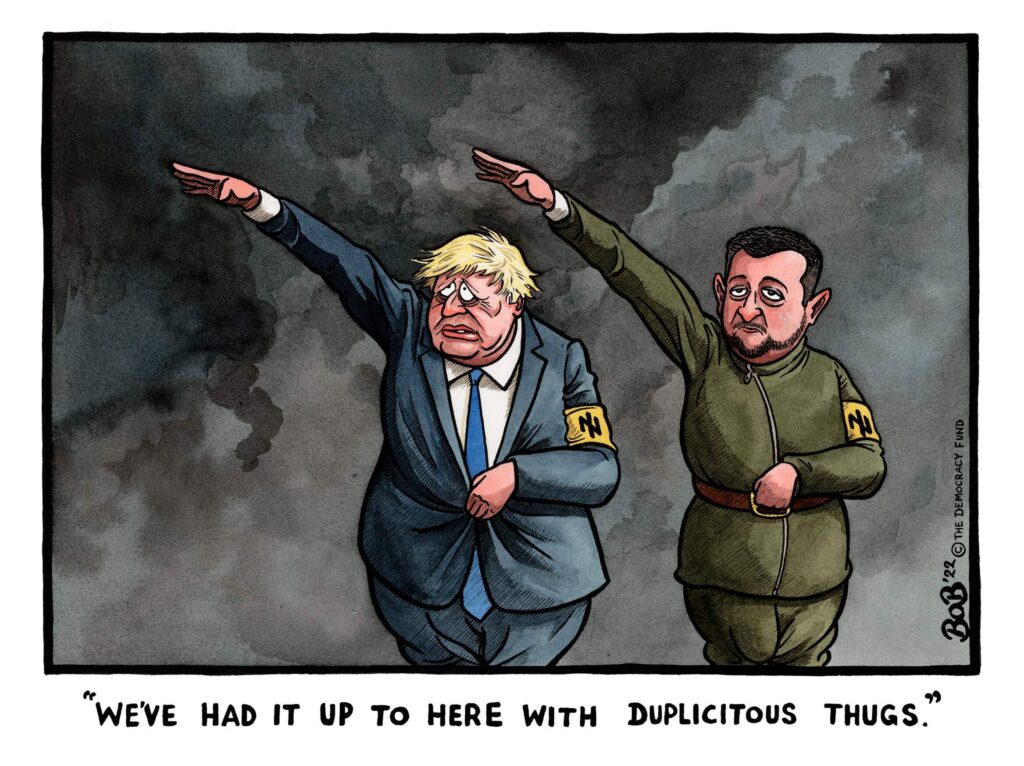