UK Column has published an interview with Dr Lawrie about covid-19 policy failures, vaccine adverse reactions, regulatory failures, and the WHO takeover.

Excerpts from the interview:

Our World Health Coalition pulled together international organisations, including doctors’ groups, holistic and journalist groups—in fact, any group with an interest in health. There are now 140 international groups working as partners, and covering science, medicine, law and activism in mind and health. They are supported by international media groups focused on finding the truth.

We were in a pandemic, so why were the WHO and other stakeholders not paying attention to the real-world health data? They had the database of drug safety, and ivermectin is one of the safest medicines, yet they were raising concerns about it.

And with millions of entries on their own databases for vaccine harms [VAERS, MHRA Yellow Card, EUDRAvigilance and others], they have said nothing about these adverse reactions and deaths, but have raised concerns about ivermectin.

They have access to a Covid therapeutics accelerator of $38 billion to support these new experimental treatments and therapies, but they are not looking at what we already had available to treat Covid.

The MHRA data does not make it easy to understand simple things. For example, the same condition is described in different ways. We were also concerned at the huge number of adverse reactions, particularly when it is acknowledged they are underreported.

So we said, “Let’s look at what the GPs [family doctors] would see in surgeries,” and we grouped things appropriately, such as bleeding and clotting and brain.

We felt better to look at mechanisms for bleeding and clotting, immune disfunction, neurological, pain, pregnancy and reproductive issues—the things people were experiencing.

The range and suffering encapsulated in these data led us to conclude that the vaccines were not safe for the population.

In May last year, 2021, we sent a letter to [MHRA CEO] June Raine, and we got a reply in July 2021. I was shocked to hear [in the reply] that June Raine felt adverse reactions were due to coincidence; the sheer volume was enough to say by the precautionary principle that something was wrong. And yet she has previously said, “Yes, effects should be reported—and don’t worry about causality.”

I was born 1958 [and so remember that] thalidomide had just 500 cases before it was stopped, but here we have thousands of reports and deaths and yet the MHRA does not say when enough is enough. And they do not define “safe”, and at the very best they are ignoring the word “safe”.

The WHO changed the definition of vaccines to include gene therapy. The injections should have stopped, but we have a Chief Safety Officer [Dr Alison Cave, MHRA] who is denying or ignoring the data.

[MHRA CEO] June Raine says the vaccines are “very safe”, yet there is no data for pregnant women. You should not experiment on pregnant women and young children. The MHRA is stonewalling on the data.

And there are huge conflicts on interest on the MHRA Board. This organisation is not acting in the public’s best interest, not conducting safety analysis, yet saying it is “safe”.

“Why would the government allow vaccines and interventions, if harmful? Why would they not investigate what is already available?

[Against this background,] our role is to communicate with the public regarding what is safe, and encourage them not to take any more, and to take control of their own health.

[But] the power of those who are corrupt is so overwhelming that people take another injection rather than consider they are harmful. It’s a very fearful position we are in.

It is also difficult for me to ask why this is happening, and for people to cope with the answer.

But it is good to ask people to question things as a start, to raise their levels of understanding.

Millions of people have had a vaccination, and only now are they asking questions about vaccine safety. If we go too far, too fast, we can scare people who have had maybe three vaccines.

We should all take these people into account and bring them along without scaring them, or taking them into a dark mental approach.”

Dr Lawrie on the pandemic treaty:

The main article in the Treaty is [the revised wording of the WHO Constitution’s] Article 21—the provision for the WHO to be responsible for lockdown and quarantine and to call a pandemic. They could demand measures with lockdowns and quarantines to “prevent a pandemic”. They get to say who will develop pharmaceuticals—and within a 100-day timescale.

But how is this very short timescale possible? And the WHO says how something is mandated, controlled and promoted.

Many people in Western democracies think that an external body to impose a treaty could never happen, but they are wanting this to be a legally-binding treaty and to be consequences for countries that violate the treaty. All countries are to be bound to the treaty in event of another pandemic.

But I don’t think the WHO has done a good job in this pandemic, and they need to be held accountable. But it only takes two-thirds of 194 countries signing up to mean that every country would be bound by it. Two-thirds is the threshold for the WHO treaty being agreed.

What happens when it is official […] nobody looks at evidence and just says, “The WHO says so.” We stand to lose our freedom and health if we are bound by the decision.

We need to remind people that we are sovereign and that we have free will and choice, and we do not have to be bound by the decisions of corrupt individuals.

Debi, you picked up that their actions would be based on cases, not deaths. I think in 2009 with swine flu, they decided to include the definition with infections, so they can declare a pandemic, epidemic, in countries at drop of a hat and to mandate vaccines.

“We are going from ten-year trials to 100 days. So this gives the WHO tremendous power, and yet politicians believe the WHO is just giving out ‘advice’. MPs are just not fully aware.”

“Politicians are not doing their jobs. I don’t know how to wake them up. They should be serving us, and they should hold government to account. We have short memories that our government has not always done its best for us.

There is a big disconnect between science and medicine; [between] law and the legal system and the political system. And if there is any corruption in [any] one of these, the message is not going to get through.

I spoke to a judge, but they felt they did not have the medical expertise to state [reservations] on the case. They deferred to the corrupt prevailing medical and regulatory body opinions.

These systems do not work in harmony for the public. We need to rethink these public-private partnerships—the root cause of corruption in academia and the regulatory bodies.”

“Private partners and industry have further infiltrated agencies and governments through foundations and charities. [Bill] Gates is hugely influential in government and the WHO.

But if you look at the Gates foundation, it makes huge amounts of money from vaccines. So you have an individual who stands to gain from the policies of the WHO and government.

He is not a philanthropist […] he promotes unsafe vaccines.”

Debi Evans on the NHS:

“The Long-Term Plan for the NHS is not working it has broken the NHS. That the NHS [should be known as] a safe place, reassuring you, making you feel better and [that it] is trusted, is gone.

The NHS Confederation has said that everything we are used to has gone.

[We are heading to a] medicine regulator with no safety, [to] genomic and precision medicines, virtual wards and different contracts for nurses and doctors.

Everything that we know has gone. GPs have been replaced with community pharmacists.

We will be monitored, surveilled and watched remotely. We are looking at a 1984 fusion of health and security. Biometric data for all of us. It’s almost like medications will cause more problems.

Gates is entrenched in the NHS with GRAIL, testing healthy people for cancer.” 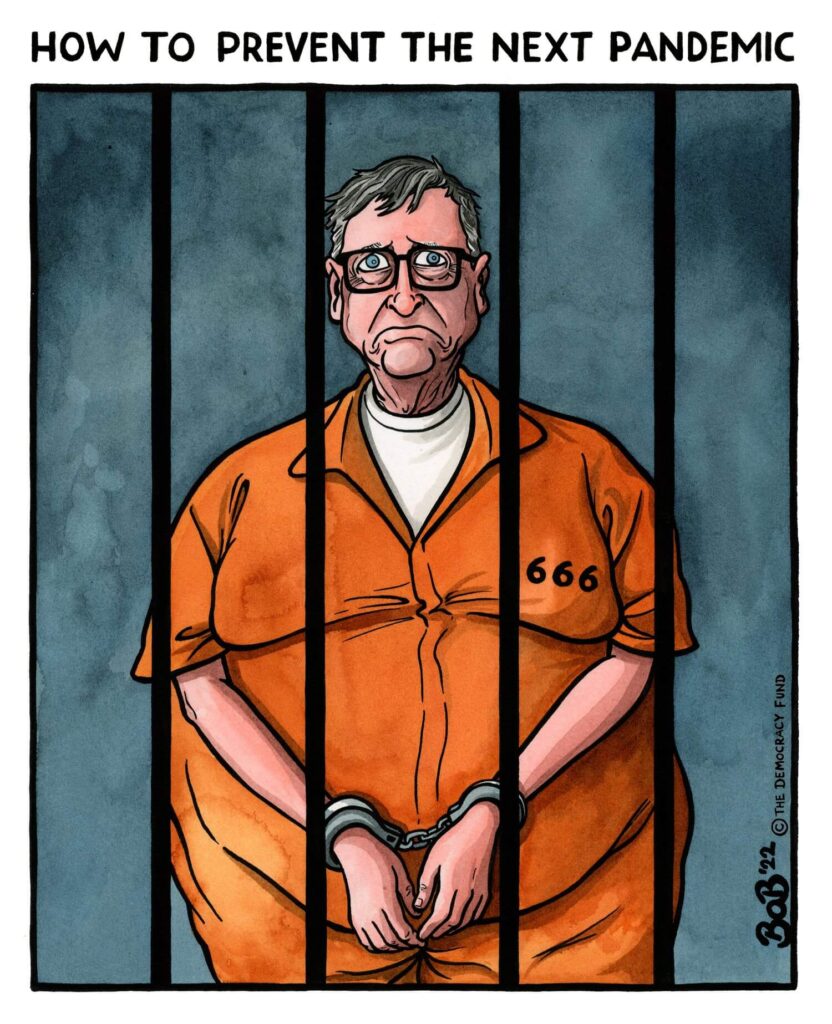