Freedom Convoy 2022 acted as an official megaphone for the peaceful demonstrators in Ottawa prior to their brutal dispersion by police, and which helped with local needs such as food and fuel for truckers and protestors, is no longer needed on Parliament Hill. As the movement continues to grow far beyond any original organizer’s imagination, continuing protests are now being organized by many different freedom-loving community groups across the country. The organic movement, sparked by a fundraising campaign, has become truly decentralized and has spread throughout the world.

We are very grateful to the truckers and volunteers who made this demonstration possible. Without their sacrifice, the public’s voice would continue to be silenced. The Freedom Convoy has inspired people around the world to stand up and make their voices heard against senseless government tyranny enabled through the sowing of fear and division. Thanks to them, the government can now hear us loud and clear. Leaders around the world have decried Trudeau’s tyrannical and unjustifiable infringement on Canadians’ rights. Over 30 countries have started their own freedom convoys in protest of restrictions, the arguments for which are crumbling as the narrative changes. Every day, more Canadians and more people across the globe are joining in to voice their concerns in Ottawa, throughout our nation, and around the world.

What started in Western Canada, gathered support across the country, and finally converged in Ottawa, was the first flick of the dominos. The political discourse has now changed and so many groups are sprouting-up all over the country and across the world advocating for the return of freedoms. For each new organization that peacefully and lawfully protests for their civil liberties, we extend our full moral support and blessings.

For three weeks, we Canadians made our voices heard. We shared love and support for one another, as seen through the distribution of free food, the playing of road hockey in front of the Supreme Court, and the numerous activities for children such as the installation of bouncy castles and hay bales. Despite all the hurdles thrown our way by the government, Canadians far and wide came together in support of the goal of ending mandates and ending vaccine passports. At Freedom Convoy 2022, we did our best as the spokespeople of the grassroots movement to represent the many diverse voices in our crowds. It was a very Canadian protest in which many independent groups revived the multicultural Canadian identity. In any direction: Albertans joined hands with the Quebecois, Indigenous leaders performed ceremonies, children gave thank-you cards to truckers, among countless other expressions of love and unity.

The unnecessary invocation of the Emergencies Act in order to violently end and disperse our protest will not be forgotten. We expressly condemn the forceful escalation by law enforcement and their evasive tactics used to avoid accountability. The police were not equipped with badge numbers, name tags or body cameras, which are standard in Canadian policing. What we witnessed was the personal politicization of law enforcement to intimidate and harm Prime Minister Justin Trudeau’s political opponents. However, we continue to be honoured to have so many first-responders and military veterans who make their conscionable stand with us. We furthermore thank the police officers, who, for most of the time we demonstrated in Ottawa, were supportive and kind. This is evident in countless videos online showing demonstrators and law enforcement coming together in solidarity. It is a shame that an opportunity for freedom and unity was squandered by the City of Ottawa, Ontario Premier Doug Ford, and Prime Minister Justin Trudeau.

We were very humbled to have been supported by so many Canadians from such diverse backgrounds who shared their personal stories with us. Every supporter’s story and courage has inspired us, and positively affected us far greater than any fear from the intimidation and violence. We are proud of everyone who remained dignified and peaceful even as force was used to inflict bodily harm upon them. We are dismayed that Tamara Lich is still being held as a political prisoner in a western democracy. This unprecedented move was made by a political class that professed to be advocating for native and women’s rights. We hope cooler heads will prevail and an eventual royal commission will be formed to address the government’s unwarranted overreach in the future.

Despite the government’s violent response to the protest in Ottawa, it is important for everyone who participated lawfully, peacefully, and made their voice heard, to recognize the success of their actions. Although some of the mandates and restrictions are still in place and despite the fact that the government refused to enter into dialogue with its own concerned citizenry, we have achieved so much. Every Canadian freedom activist should take pride in the following accomplishments:

1 – Accomplishments that are COVID-19 restriction specific:

Restrictions are being dropped by provincial governments across Canada and federal governments around the world. For instance: in Quebec and British Columbia, restrictions are loosening; in Ontario and Alberta, most mandates were lifted March 1. The federal government has also lightened international travel requirements but still discriminates against people who have natural immunity or who made a personal medical choice not to get two shots. We encourage the government to continue on this path, and urge them to end all restrictions.

2 – Accomplishments that are governance specific:

The Canadian Civil Liberties Association has filed a lawsuit against the federal government for their unjustified invocation of the Emergencies Act. The government has furthermore provoked many lawsuits over illegal activity, such as the de-banking of law- abiding Canadians. There are also challenges making their way through the court system to overturn the infringement of our Charter Rights such as Brian Peckford’s lawsuit. These will all take time, as they make their way through our courts but we are confident they will be successful as challenges in other countries have been. In New Zealand, a judge recently ruled that the vaccine mandate Order is not a reasonable limit on rights that can be demonstrably justified in a free and democratic society and that it is unlawful. The ripple effect will continue.

3 – Accomplishments that are politically specific:

The Freedom Convoy 2022 has changed the political climate, which so far has even re- ordered political parties. As the investigation into the government crackdown on Ottawa will reveal the bad faith and unlawful force used against peaceful assembly, we expect more positive changes in the near future.

The fight to regain our sacrosanct freedoms continues. Each of the above-mentioned victories have proven our demonstration’s purpose and strengthened freedom activists’ resolve across the planet. The political advocacy to fight for Canadian freedom continues through non-affiliated projects.

We are very honoured to have been a part in the Freedom Convoy 2022 demonstration, and although the organization in its original format has been dispersed, arrested, de-banked, sued and gag-ordered, the movement has only just begun. So many Freedom organizations across the country have stepped-up to carry the Freedom Convoy’s momentum forward by organizing their own initiatives and protests in Ottawa and cities across the country, and we wish each and every one of them well in their peaceful demonstrations. We ignited a flame that has lit a fire in everyone’s heart, that will never be extinguished. We are excited to see the growing momentum, and will forever support all peaceful Freedom activists in pursuing the same goals that brought us all to Ottawa, and shook the world awake.

Yours in Love, Peace and Solidarity
Freedom Convoy 2022 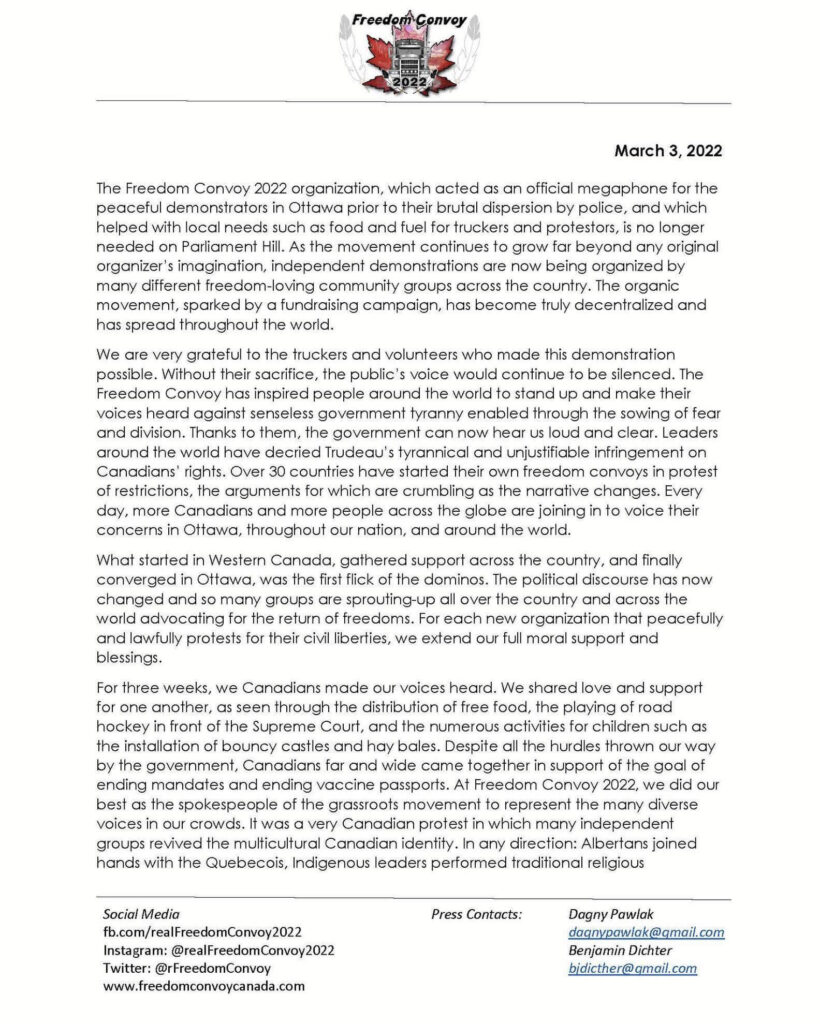 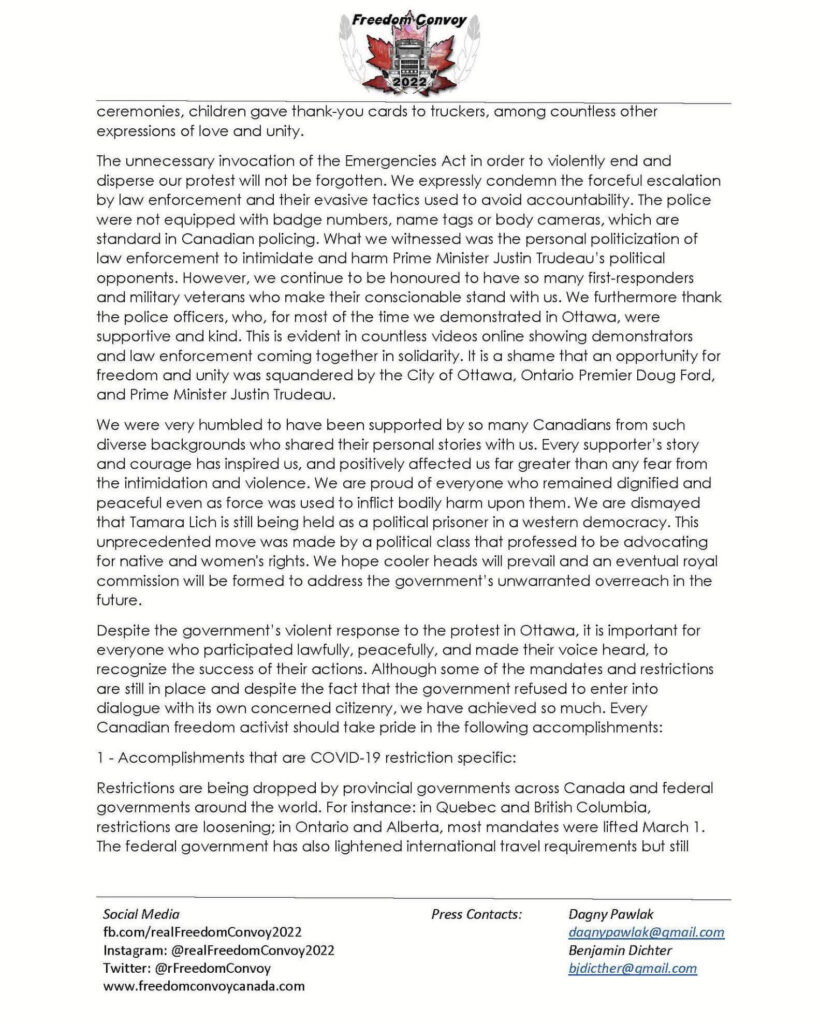 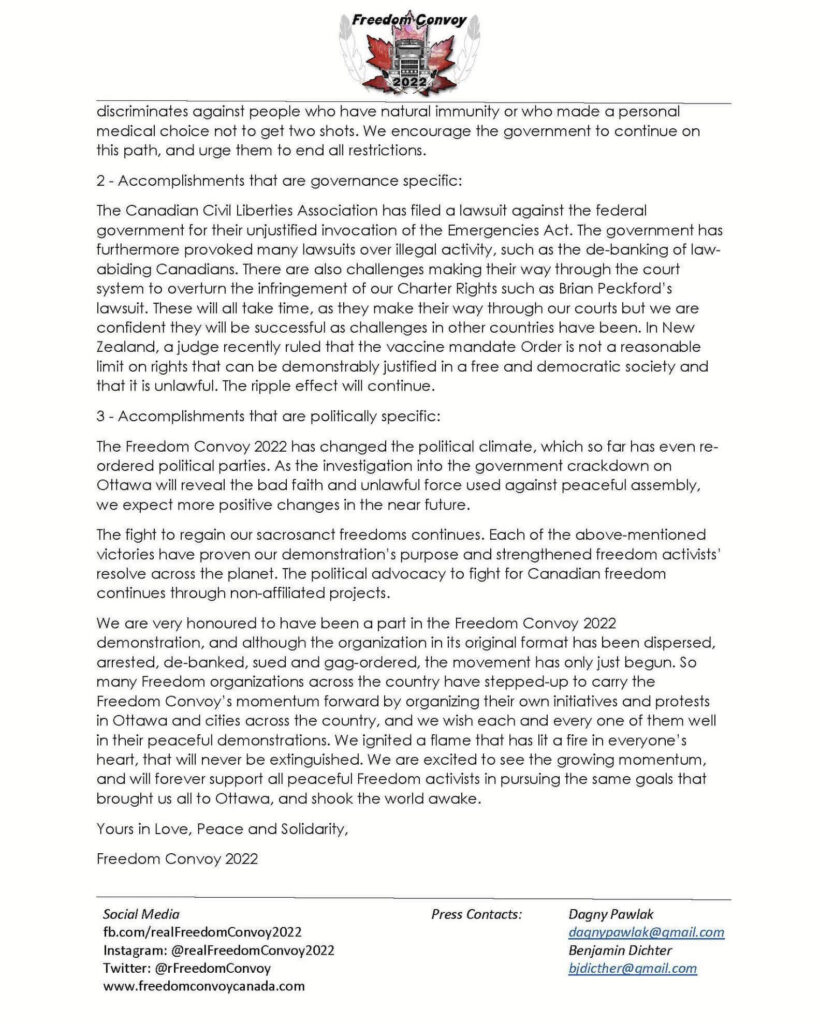