When the mothers of Leicester noticed that children became unwell after the smallpox injection, they protested against compulsory vaccination. They were fined and locked up in prison for not getting their children vaccinated, but their husbands defended them and stormed the town hall. Neither coercion nor prison stopped the people from Leicester in their struggle against forced vaccination. Subsequently, Leicester had the lowest number of deaths from smallpox.

The Exposé writes in Vaccination – The Greatest Lie ever told? (Part 1):

Around this time the UK city of Leicester had higher vaccine uptake rates than London, better sanitation and general living conditions. Yet they suffered far worse than London in the 1871 Smallpox epidemic. With a 95% decrease in vaccination among the population and focus on improved sanitation the town of Leicester was able to bring the virus under control without the aid of vaccination.

By the dawn of the 20th century the public, health experts and certain officials were aware of the detrimental effects and inefficacy of the Smallpox vaccination and rose up to demand the withdrawal of the mandatory vaccination act. They were successful. It was not until after the act was repealed in the UK in 1907 that a significant decrease in cases of Smallpox was recorded. (…)

While some vaccines provide a degree of immunity for a limited time period, that immunity is not absolute. Vaccines are not a full proof plan neither are they the only means of controlling the spread of disease. The UK city of Leicester once taught us this. Vaccines may benefit some people yet we must remember that along with the immune response a vaccine generates come ingredients that can and do cause side effects, up to and including death. This is exactly why the public of England rose up to demand the end of vaccine mandates during the early part of the 20th century. They did not seek to stop those who chose vaccination for themselves from having that option available to them. All they wanted was the freedom of choice. The right to choose what was best for their body and the bodies of their children according to their current situation, health and beliefs. They did not find it acceptable that they should be fined or imprisoned or otherwise penalized for making a decision that related directly to their bodily autonomy.

Effective or not the idea that someone could force or otherwise coerce a person against their will into taking a medical treatment that has even the smallest potential for ill consequence was no more acceptable in 1907 than it is today.

Especially when the success of such a treatment and the full consequences for both the individual and the greater community are yet to be definitively established.

The following are excerpts from an essay written by Dale L. Ross. Download the full article here: Leicester and the Anti-Vaccination Movement – 1853-1889

During the nineteenth century and especially after an Act of 1853 made it compulsory for all infants over four months old in England and Wales to be vaccinated, opposition to the practice of vaccination increased steadily. A further tightening up of compulsory measures was made after the smallpox epidemic of 1871, as a result of which a Select Committee was appointed by the government. The report of this committee confirmed the principle of compulsion amongst other recommendations, and these were embodied in new legislation by an Act of 1871, which made the law so stringent that, between 1871-76, only four of the local Boards of Guardians proved obdurate. Leicester is taken in this article as an example of a town where the opposition to vaccination was particularly marked and where, due to the agitation caused, the various anti-vaccination forces had their greatest success in bringing about a change in the 1871 Act. (…)

On 21 October 1884 the Leicester Board of Guardians drafted a memorandum to the Local Government Board in London requesting modification in the existing prosecution machinery especially since the “Leicester Method” was proving so successful in preventing the spread of any cases of imported smallpox. Under the circumstances, the Local Government Board did nothing to satisfy the Leicester Board of Guardians. Considering the state of the opposition, inflamed further by the prosecutions, it is not surprising that this culminated in a massive popular demonstration on 23 March 1885.
This demonstration was carried out under the auspices of the Leicester Anti-Vaccination League and one of the main organisers was its Secretary J. T. Biggs. This was not a purely local affair, since other local Anti-Vaccination Leagues co-operated by sending delegates from over fifty towns in England, Wales and Northern Ireland. The first phase of the demonstration consisted of a procession with flags and banners, from the Leicester Temperance Hall towards the Market Place where the throng was addressed by various speakers who developed the theme of the futility and injustice of vaccination. The final phase, in the evening, was held in the Temperance Hall, when once again the whole practice of vaccination was condemned by all the speakers. 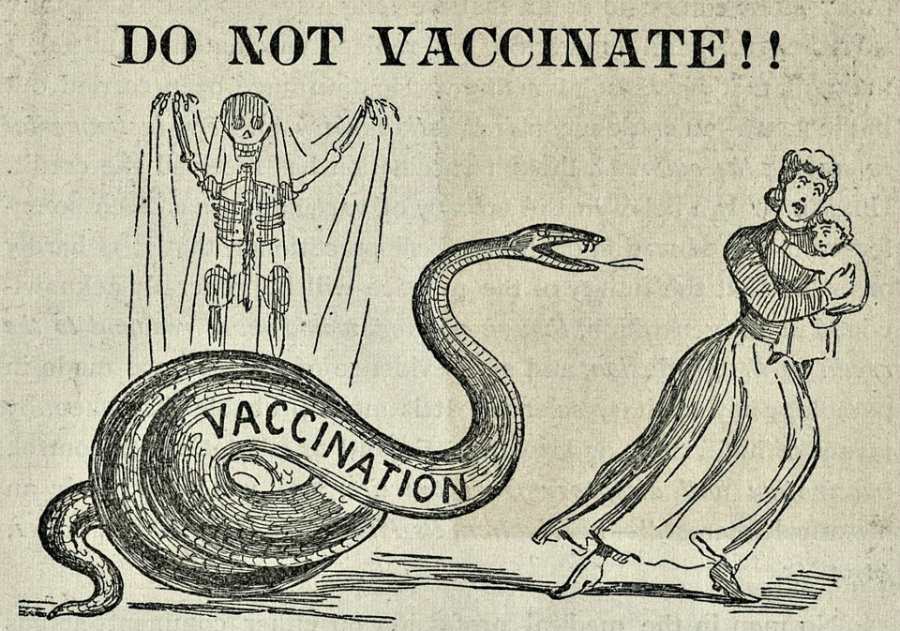