In Part I of Menticide 101 and the Brainwashing of a World, I discussed how fearful expectation is deliberately programmed into people (via propaganda, news, et cetera), not just to make people fearful in order to control them, but in order to change their psyche, for the worse. The aim is to harm people. This programming not only causes psychological harm, but can—and often does—result in physical harm. Much of the critique of the “psy-op” during the Covid era has focussed on the ethics (or lack thereof) of making people frightened, or faulty thinking as a result of fear (including faulty cognitive processes and groupthink). However, menticide—the murder of the mind—is far more sinister than that, and its effects are deliberately and subtly far-reaching in the existential situation we find ourselves in today.

We come to the heart of the menticide machine in the work of the famous Russian physiologist Dr Ivan Pavlov (1849–1936).  In The White Nights: Pages from a Russian doctor’s notebook (1956), Pavlov’s biographer, Dr Boris Sokoloff, describes an incredible account of his visit to his laboratory. Pavlov is known for his work on classical conditioning, which has informed much thinking around behaviourism in psychology. Sokoloff describes his visit thus:

“What is wrong with these poor creatures?” [Sokoloff] asked. “What have you given them to make them so nervous?”

“Quite…But we hope to prove that the etiology of cancer is in the alterations of the central nervous system…Well, this is the first step in that direction. I rendered these dogs neurotic.”

“How?” I was fascinated.

“By using the technique of conditioned reflexes. First, by forming them with a bell or a light, and then inhibiting them. This technique can induce a state of extreme neurosis in normal dogs. You can see yourself that they are neurotic.”

And they were, indeed.

“Now,”, Zelenyi continued, “we shall see if a malignant tumour develops in these dogs. We might know in a year or two.”

It was to take more than twenty years, however, to complete the investigation. Not until after the death of Pavlov and Zelenyi were the results published by Dr Maria Petrova and other Pavlov students, partially confirming their master’s theory. White Nights, pp. 205–6 (2018 edition, Bowen Press, Texas)

It is common knowledge in the psychological “industry” that induced stress is linked to a myriad of physical and psychological disorders, including depression, anxiety, obsessive compulsive disorders, substance misuse and psychotic-type disturbances.

Not just the Soviets

From a public health perspective, it is surprising and highly concerning that the UK Government and devolved administrations have deliberately, on the advice of psychologists from the SPI-B behavioural committee of the Government’s scientific advisory body SAGE and from the Behavioural Insights Team at the Cabinet Office, used—and are still using—methods derived from Pavlov in their response to Covid-19, the supposed climate emergency and the Ukraine war; methods which are making us all psychologically and physically unwell.

For Laura Dodsworth’s book A State of Fear: How the UK Government weaponised fear during the COVID-19 pandemic, the author interviewed psychologist members of SPI-B. Some were prepared to admit that their tactics may have been ethically dubious, some felt uncomfortable, and some said they thought the tactics necessary. Unfortunately, the interviews with the psychologists are just not credible. Knowing psychologists as I do (I trained as one), I am aware that they pride themselves, to the point of arrogance, on being able to decipher data and being able to conduct themselves in their actions to the highest possible ethical standards.

The members of SPI-B interviewed by Dodsworth never seemed to query the actual risk of Covid-19, but take the hype around Covid-19 as a given. More importantly, it is just not credible that the psychologists did not know that they were breaking the ethical and practice guidelines of the British Psychological Society; see my earlier article Psychological Attack on the UK in the Mind section of the UK Column website.

Why am I so sure that the psychologists interviewed for State of Fear are dissembling?

Firstly, they would be well aware of the ethical duties contained within their code of conduct and of how tactics that deliberately make people fearful were completely against the code of ethics.

Besides the incredibly poor ethical knowledge purportedly displayed by the psychologists in Dodsworth’s book, another clue which certainly points to the deliberate nature of their tactics is from a webinar, Covid-19: Towards the New Normal, and Beyond, actually hosted by the British Psychological Society, which was recorded on 5 May 2020. The panel featured Susan Michie and Kathryn Scott. The discussion clearly shows that the British public was being deceived and lied to by the UK Government about what was taking place in early 2020; it was never intended to be “three weeks to flatten the curve” when that phrase was intoned on 23 March 2020. The psychologists in the webinar discussed how immunity passports were already being discussed prior to May 2020, and that the public was being manipulated (unawares, without informed consent) for behaviour change to a “new normal”. I must conclude that there was no intention, even then, that old freedoms were going to be returned.

This indicates that the psychologists in Dodsworth’s book were not being truthful about the extent of what they knew and the plans which the UK Government had in store for us. In the video of the May 2020 BPS webinar, at the 24-minute mark (this timestamp), Professor Susan Michie mentions that the issue of immunity passports was discussed by the House of Commons Science and Technology Committee on 28 April 2020.

It was never “three weeks to flatten the curve”, to “save the NHS”. That was a blatant lie. (…)

We have to realise that we are not dealing with particularly rational or logical people; they speak with forked tongues. The psychologists in SPI-B know very well how the menticide-inducing propaganda works, as does the UK Government—it is planned. Any feigning of partial innocence or ignorance is no better than the schizogenic mother in R.D. Laing’s example.

Just as Hannah Arendt argues (see Part I of this article), the totalitarians are attempting to transform our human nature; this horror is exemplified by queer theory ideology (e.g. the destruction of the family, trans ideology, contra-reproductive futurism), by transhumanism (e.g. merging artificial intelligence with biology), and by the vaunting of medicine, technology and science as the new god (e.g. zero-carbon utopia, smart cities, digital world, mRNA “vaccines” with constant upgrades needed). All are part of this drive for the dark transformation to the biosecurity state, a scientific dictatorship and the “new normal”. 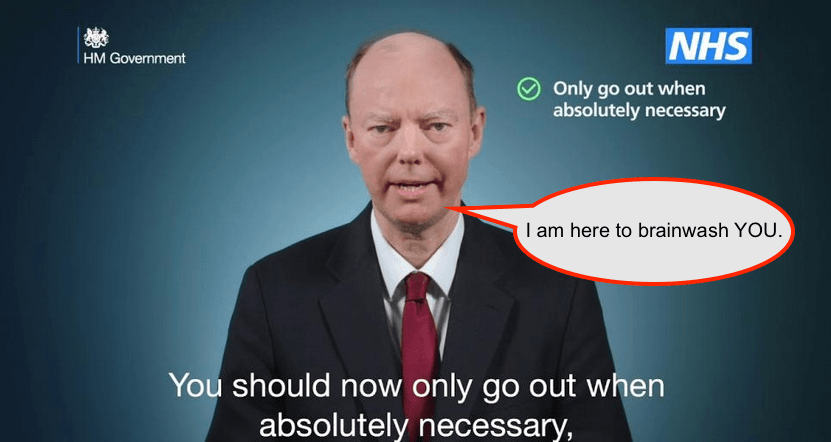