“The people who got Brexit done, the people who delivered the fastest vaccine rollout in Europe, and never forget, 70 per cent of the entire population got a dose within six months. Faster than any comparable country. That’s government for you, that’s Conservative government. People who organised those prompt, early supplies of weapons to the heroic Ukrainian armed forces. An action that may very well have helped changed the course of the biggest European war for 80 years.”

If you remember, Boris Johnson resigned on July 7 after more than 50 government ministers resigned, saying they had lost confidence in him as leader. It followed Johnson admitting it was a “mistake” to keep Chris Pincher on as a government whip despite sexual misconduct allegations against him. (Chris Pincher: remember him? Government whip? Sexual misconduct? Surely not.) Anyway, the waters have closed over Johnson, and good riddance. He achieved nothing but the “Brexit” he so clearly didn’t believe in; and for his stewardship of lockdown he deserves to be burnt in effigy every year.

That said, new PM Liz Truss is not likely to make a lot of difference.

She’s hardly the only one in recent decades who has risen to high office, silently and without visible achievements. Given how many replaceable careerists there have been, it’s hard to still believe in accident or incompetence. They seem deliberately chosen to sponge away any lingering democratic illusions: that political parties are answerable to voters, say, or that government is not a tax-trough for the unscrupulous.

Given her political journey, it’s hard to say what she believes in, if anything. She has said she will “govern like a conservative” and “deliver a bold plan to cut taxes and grow the economy and … energy bills.” None of that will get in the way of what actually meant by “Global Britain” : a boundary-less economic opportunity zone for international capital; cheap labour from a cowed, deracinated population; total digital surveillance by unaccountable corporates; and ideological control of all areas of life.

That said, as rock-bottom as expectations are, this is Liz Truss’s opportunity. Britain, like everywhere else, is in need of actual political leadership. If she really does have cards to play and levers to pull, now is the time. Nothing would be better than being proven wrong right now.

It matters not. Truss, Sunak, Johnson and the rest of the Westminster bench-warmers are but parasitic fleas on our mangy rabid dog of a government, fed scraps from its elite masters’ table only so long as it continues to shepherd us into the arms of Klaus Schwab and his transhumanist Great Reset.

The entire faux democratic system across the West is clearly broken and corporatised and needs urgently to be replaced. The problem is—by what? Ideas on a postcard, please. 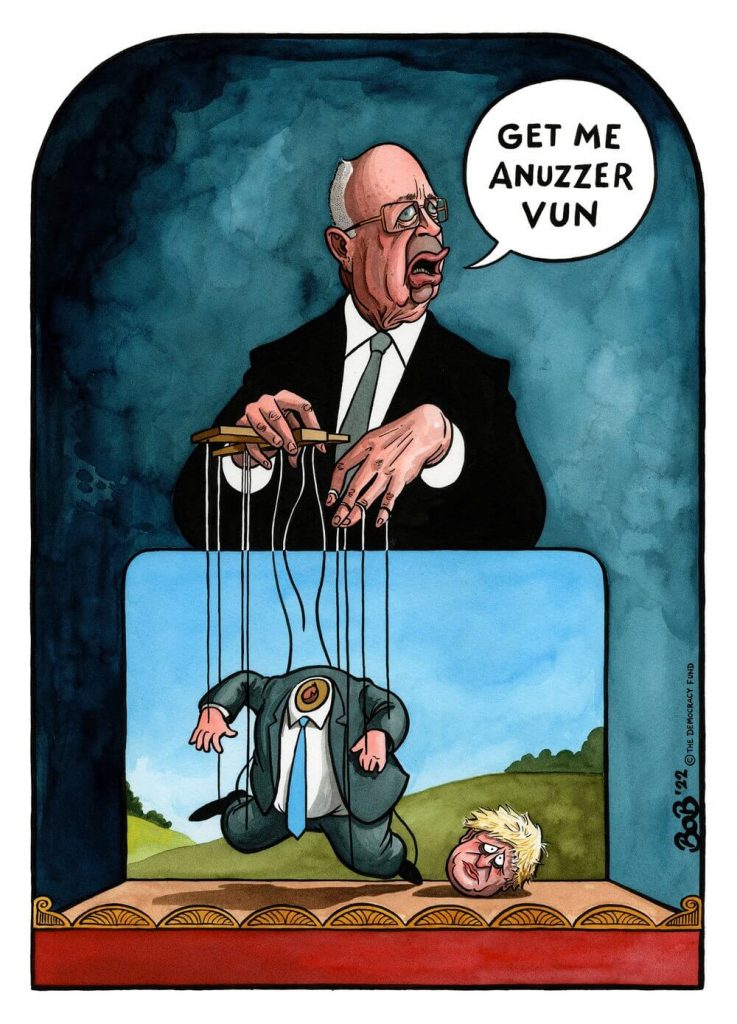