At the risk of seeming crass at this Sad Moment (which “our free press” will now embellish with their usual restraint and dignity), I urge that we remember, in the days and weeks to come, that (1) Queen Elizabeth (reportedly) was triple- “vaccinated,” and (2) then, roughly one year later, caught “COVID,” which she (reportedly) had trouble getting over (assuming she got over it); and (3) now she’s dead.

I think we should remember those three facts, since “our free press” clearly wants us to forget both (1) and (2), screaming—with their usual lucidity and honesty—that Her Majesty was not killed by her “vaccination.” Here’s the “evidence” that she most certainly was not, as marshaled by the Einsteins at Politifact:

Her son, now King Charles, said in a statement posted on Twitter that he and his family “mourn profoundly the passing of a cherished Sovereign and a much-loved Mother.” He didn’t mention the COVID-19 vaccine.

Elizabeth and her late husband, Prince Philip, were first vaccinated against COVID-19 in January 2021. She tested positive for COVID-19 about a year later. News reports then noted that she had been fully vaccinated and received a booster shot by the time of her diagnosis.

In the months since, media reported on health issues affecting the queen — especially COVID-19 — but there was nothing about a vaccine endangering her life.

What’s notable about that “case,” aside from its jaw-dropping stupidity, is its sly avoidance of the fact that Elizabeth’s “late husband, Prince Philip” had, four months after his first “vaccination,” died, at 99. Of what? Here’s what StyleCaster reported five days later:

Prince Philip’s official cause of death hasn’t been revealed by Buckingham Palace yet, but many believe that his declining health could’ve been a result of a recent infection and heart issue. On February 16, a spokesperson for Buckingham Palace confirmed that Philip has been admitted to King Edward VII’s Hospital in London as a “precautionary measure.” A week later, Buckingham Palace reported that Philip was in the hospital for an infection. The palace confirmed that the infection was unrelated to the novel coronavirus, which he and the Queen had been vaccinated against in January 2021.

So, five weeks after his first (and last) “vaccination,” Philip was admitted to the hospital for treatment of “a recent infection and heart issue”—problems “unrelated” to COVID-19, “which he and the Queen had been vaccinated against in January 2021.” Thus “the palace” inadvertently revealed, to readers brighter than the nitwits at Politifact, that Philip’s fatal illness surely was not “unrelated” to that “vaccination”—just as the Queen’s last illness could have been induced by her three “COVID shots.”

Now, it’s possible, of course, that neither one of them was actually injected, any more than Dr. Fauci or Bill Gates, or Gavin Newsom, or Justin Trudeau, actually got jabbed. If the royal couple, like those others, only feigned their “vaccination,” then one might ask exactly what kind of “infection” and/or “heart issue” carried Philip off, and how Elizabeth came down with “COVID.” I have a friend in Britain who suspects that they were killed so as to further normalize the “sudden death” of older people—a paranoid idea, perhaps, though there’s no doubt that this relentless “vaccination” drive has had precisely that effect, as countless elderly have been “dying suddenly” in unprecedented numbers these past 18 months; and all too many (younger) people—including readers of this column—shrug it off as not that big a deal.

Talk about crass. The notion that it’s not so bad for older folks to be killed off before their time, regardless of their fitness and vitality, is one that the eugenicists of yesteryear embraced, and that their psychopathic heirs have been promoting for some time—like, for example, Dr. Ezekiel Emanuel, a “bio-ethicist” whose “Why I Hope to Die at 75” raised something of a stink (though nowhere near as big a stink as it deserved) when it ran in The Atlantic in 2014, foretelling the catastrophe that rolled out six years later, and that’s been killing countless older people in particular—so many, and so flagrantly, that one might easily define the COVID crisis, from the outset, as a deliberate global exercise in what Dr. Vernon Coleman has called eldercide.

One might compare this systematic cull of “useless eaters” to Aktion T4, the Nazi program of involuntary euthanasia to cleanse Germany of children with disabilities; except that this program is vastly larger, hasn’t stopped (Aktion T4 ended quickly, once the Church protested it)—and far more perverse, since Hitler et al. never feigned concern for the disabled, whereas this global eldercide was mounted in the name of “keeping Grandma safe.”

Under that sentimental cover, the Eichmanns of the COVID crisis quickly managed to exterminate old people in large numbers. They did it through the lockdowns that kept countless elderly in isolation from their families, causing, in April, 2020, a sharp uptick in excess mortality, due mainly to deaths of despair (as Denis Rancourt showed early on). They did it through the criminal warehousing of COVID patients throughout nursing homes in New York, California, Michigan, Washington and North Carolina, as well as the UK and Canada, leading to a special boom in COVID deaths for which no one has been held accountable. (Gov. Cuomo was ejected not for that mass murder in his state, but for sexual harassment.) They did it by denying countless older people proper treatment, and intubating them instead—a practice estimated to have killed 90% of those elderly hooked up to ventilators (based on a lethal protocol devised in China, and which the WHO then recommended to the world). They did it by outright euthanizing of the elderly, most notably in Britain, through the swift administration of midazolam, so as to put them all to sleep, and thereby save the state a fortune in retirement benefits and medical expenses—a great financial boon that surely also influenced the overseers of other “democratic” countries, including Italy, whose aged population has been gradually slaughtered, from the lockdowns through the ongoing “vaccination” drive—and so it’s been elsewhere throughout the world.

It’s not for us, or anyone, to say that people of a certain age should die, already, never mind whatever economic benefits such termination yields. Even Queen Elizabeth, who died at 96, had every right to figure she might live to 99, like Philip—or 101, like her own sturdy mother. I make this point in full awareness of the Windsors’ own eugenicist affinities—as evidenced by Philip’s heinous quip from 2009, which flashed all over “social media” upon his death: “”In the event that I am reincarnated, I would like to return as a deadly virus, to contribute something to solving overpopulation.” Although he’s far too smooth to say a thing like that (in public), King Charles III is just as keen on “solving overpopulation”—as is his son Prince William, who, just last year, infamously bitched about how “overpopulation” throughout Africa is hurting wildlife there. (William has three children.) And now, at 73, the Prince of Wales can finally step outside his mother’s shadow as King Charles III—a title whose prestige is likely to enhance his efforts to depopulate the world, along with such fanatics as Bill Gates (who also has three children) and Klaus Schwab.

And those of us who don’t believe in an untimely death for anyone must— therefore—keep on working to indict all those who organized the COVID crisis to put all the rest of us to death before our time. Their systematic murder of the old must no more be forgotten, or forgiven, than the countless other murders they’ve committed, and are still committing now. 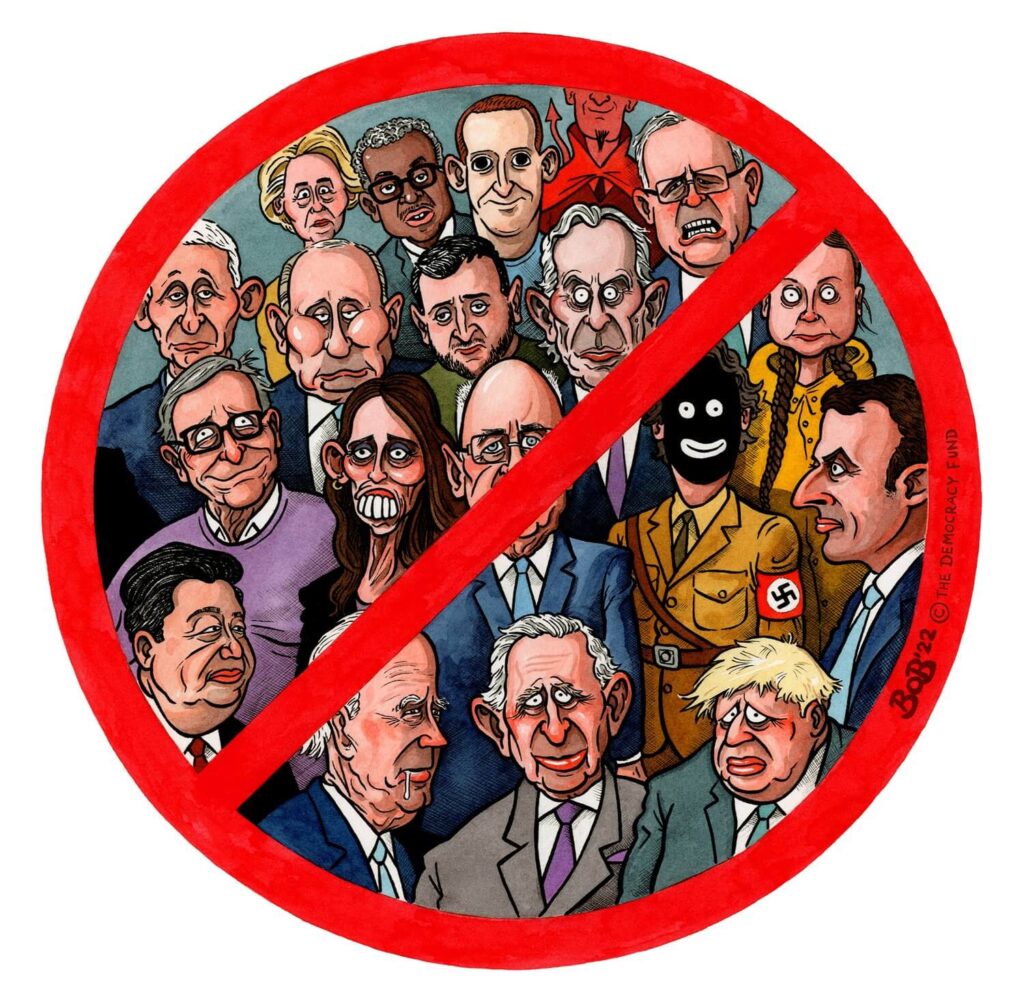