Hello… today I’ll be telling you the heart-breaking story of a world that allowed corrupt bankers, out-of-control politicians, tech giants and massive drug companies to exploit and decimate its population under the guise of a global pandemic.

When you are ready, I will begin.

Once upon a time on a planet not far from our own there lived people who mostly worked hard and enjoyed life.

As time went by they invented things like electricity, cars and aeroplanes, which made their lives better still.

And just like us they came up with computers, mobile communication and the internet and found that, in the blink of an eye, they could send information all over the world.

It seemed idyllic and no-one thought for one minute that something awful was about to befall them. But it was!

A cabal of conspirators armed with God-like delusions, dark money and immense power over much of the world decided it was time to complete the job.

One of them had an enormous technology corporation that prospered mightily. He was hugely rich, unhinged and extremely greedy. Some called him the Gates of Hell.

Another was the shadowy Vladwab who for years had been brainwashing gullible young people for the future role of a global puppet leader.

They joined forces with a wicked scientist named Mengowci and together they conspired to use population reduction and absolute control of the world as a way of securing unimaginable wealth and power.

Drug companies too were super-rich. They had convinced governments around the world they had cures for many diseases, charging vast sums of money in the process.

Bankers were also involved because, unbeknown to many, they privately owned and controlled most of the world’s national banks. They’d been stealing people’s savings and pension funds for years and pretty soon the banks would be running out of money.

The objective of these unelected globalists would be to seize control of the world, cut population size by up to nine-tenths and, with the help of tech implants, ensure those that remain become docile and obedient slaves. They called it Operation Reboot!

The enslavement agenda was ingenious. They would announce the arrival of a dangerous new virus called Coppit-99. Mengowchi would persuade governments everywhere that millions of lives were at risk and only by paying him a huge amount of money for a vaccine could they be saved.

Next they would create a dangerous new drug, calling it a vaccine so people would feel safe taking it. In fact it would be a bio weapon for sending spiked proteins and other unpleasant stuff into the body of its victims, sometimes with fatal results.

The so-called vaccine would be far more dangerous than the virus. It would have a short lifespan to justify a never ending need for booster shots… and of course, never-ending deaths and profits.

The drug companies would instruct governments that people had to wear masks, socially distance, wash hands constantly, and stay at home for long periods of time. None of this pantomime would offer protection against a virus. It’s real purpose would be to create and maintain an Orwellian state of obedience and fear.

The elderly would be most at risk from both virus and jab and the resulting deaths would reduce pension pay outs and help the Cabal hide the fact they had stolen everyone’s money.

People would be instructed to use a digital vaccination card in order to help governments control the pandemic. In fact its real purpose would be to monitor, regulate and control everything they do, preparing those who survived for their future life as a slave.

The Cabal would run the planet and, with money running out, they needed to own the entire resources of the world and its population. People would be medically controlled and implant enhanced and live in a rented home. They’d have a small allowance and privileges that give them a day-to-day life… so long as they obeyed the rules.

They would be told… “You will own nothing and you will be happy”. In our world this would be called communism

And so, with the Coppit-99 virus said to be circling the world, Operation Reboot began.

The media and medical worlds had already been “bought off” by the Cabal. Mainstream news was ordered to report that Coppit-99 was killing people in their hundreds of thousands, that jab refusers were dangerous idiots, and vaccination was the only solution.

In fact official figures later showed that for the year the mainstream media was reporting huge numbers of Coppit-99 victims, the total number of all-case deaths was in fact little different to the year before.

Clearly the virus was no more dangerous than our flu so the Cabal had to move fast. They came up with a fake test that appeared to show millions around the world being infected… and it worked.

Soon countries were clamouring to get their hands on the so-called vaccines, some signing ridiculously one-sided contracts with drug companies, handing over sovereign assets and taking full responsibility for the deaths and injuries to come.

Meanwhile, most people just went along with the propaganda, and never for one moment thought they were being deceived. They expected governments and media to be telling the truth and looking after their best interests. In fact they were sleepwalking into a totalitarian nightmare.

They even celebrated when the arrival of Coppit vaccines was announced, not realising the timing was impossible and that much of the dirty work had taken place years earlier.

And so, as predicted, the money tree began to produce great riches for the drug companies as millions around the world queued to receive jab after jab. “Important” people on camera were given harmless saline while the masses had the real thing.

The Coppit-99 jab had been tested on animals and all of those had died. But that didn’t stop our genocidal conspirators injecting children and pregnant & breast-feeding women. Soon word got out that the rate of miscarriage among jabbed women had risen from 10 to over 80% and independent scientists were warning that surviving children were likely to be infertile.

Over a one-year period in a country called Oukay, some 178,000 people died from the jab and many more were injured, many severely. At the same time more than 1000 athletes collapsed and/or died in action around the world and pilots were passing out at the controls.

As instructed, the popular media continued to ignore all that was happening.

For the evil plan to work the Cabal needed the vast majority of people to be continually jabbed and those who refused were called anti-vaxxers who were betraying their country. This split families and friends alike, exactly as planned.

Divide and conquer was the name of the game and those who defied Operation Reboot could lose access to shops and entertainment, having their car and driving license taken away, their bank account emptied, home seized, and even leave them facing prison.

In the beginning, most people were so frightened by the pandemic propaganda on mainstream news, they believed everything they were told. Eventually, however, doubts began to emerge.

The weaponised injection was reported to be destroying people’s T cells. They were losing their immune system and developing AIDS and within a few months a big rise in heart attacks, strokes, blood clots and cancers had been recorded. Meanwhile, hospital workers were privately reporting an avalanche of strange and unusual diseases among the vaccinated.

It looked like mass murder on a world scale and not unlike how the Nazis behaved on our own planet in World War II. Official figures now showed that, despite government denials, the vast majority of hospitalised Coppit-99 patients were jabbed and far more likely to die than the unvaccinated.

Even more shocking, some doctors and nurses were seen deliberately ending the life of elderly patients, in return for bonus payments. Others who could see what was happening were threatened, sacked or made to resign after speaking out or refusing the jabs.

At last people began to take notice. Around the world, opposition was growing, resistance organised, and demonstrations of up to a million people were taking place.

Still none of this got reported by the mainstream media.

Top lawyers came together and assembled a huge team of experts. Their plan was to take the Cabal to a world court, accusing them of crimes against humanity. Just as happened in Nuremburg after our own World War II, the excuse that “I was only obeying orders” would count for nothing.

This worried some of the Cabal and defections began to take place. But was it too late? We don’t know because this terrible story has yet to run its course and the ending lies in the hands of the people. Will enough of them wake up to the lies, deceit and tyranny and fight for their freedom?

Meanwhile, the drug companies have been doing everything possible to halt the use of Imacurin, a cheap, safe and effective drug that saved countless lives. They’d realised that, if people give up on the weaponised jabs, the evil plan could fail.

So governments have been instructed to intensify the propaganda by announcing supposedly dangerous new variants while drug companies are said to be planning a more lethal virus.

Back here on planet Earth, Edmund Burke is believed to have said: “The only thing necessary for the triumph of evil is for good men to do nothing.” Wise words that must surely be heeded.

Finally, I bring you the latest message from our planetary neighbours:

“Our world has allowed corrupt bankers, out-of-control politicians, tech giants, pandemic profiteers, massive drug companies and a host of multinational corporations to dangerously exploit our population under the guise of a global pandemic. They’ve done it in order to ruthlessly expand their already enormous power and wealth.

“Coppit poses little risk to most people, especially children and young adults. The real risk lies in the weaponised jabs supposedly created to control it.

“The pandemic is a long-planned cover story to facilitate the biggest transfer of wealth and power in our history, and the greatest ever erosion of personal freedoms and civil liberties.

“Public fear may be subsiding as people grow used to the absurd restrictions and unprecedented levels of vaccine death and injury, but it’s unlikely the Cabal will be stopping here. They already have plans to deprive us of food and energy supply and before long there will be new and ever more intense attacks. May God help us defend our rights, our lives and our independence.”

WHAT’S HAPPENING HERE COULD ALSO BE HAPPENING ON PLANET EARTH. SO WAKE UP, LOOK AROUND – AND THINK! 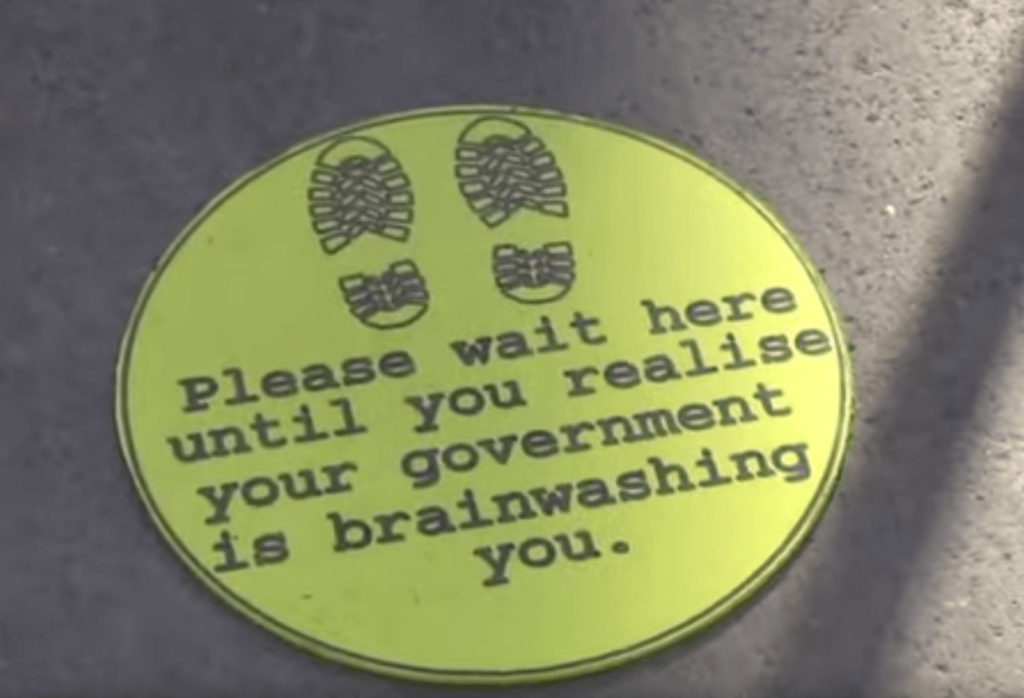