Our children are being sacrificed for the mRNA injections in multiple ways. The so-called vaccines contain cells of aborted children, and children injected with the covid vax, may be harmed, killed, or unable to have children later in life. Yet, the NHS – fully slave of the depopulation plan and Agenda 2030 – is still advertising for the death jab.

We are living in a time of great evil, and it is necessary to ask Heaven for help. The good news is that with the intervention of the Mother of Christ, we can overcome any darkness. Christ entrusted Himself to Mary by becoming a small dependent child. If Christ, who is God, the Creator of heaven on earth was humble enough to entrust himself to this meek woman, why shouldn’t we all the more? Our Lady of Guadalupe, pray for us!

Around 1531 child sacrifice was still part of the culture in the area of today’s Mexico. The apparitions of Mary in Guadalupe brought an end to pagan human sacrifice, and more than eight million natives converted and became Christians.

Watch this short video: The Answer to the Darkness

Story of Our Lady of Guadalupe and Saint Juan Diego(democratbob/YT):

Who is Our Lady of Guadalupe?

Patroness of the Americas and the Unborn

The first apparition took place on December 9, which at that time was the Solemnity of the Immaculate Conception in the Spanish Empire, of which Mexico was then a part. Our Blessed Mother appeared to Saint Juan Diego, an older native American who had recently lost his dear wife. Juan Diego himself died in 1548, seventeen years after the apparitions, at the age of 74. On May 6, 1990, Pope Saint John Paul II, during his second pilgrimage as Pope to the Shrine of Our Lady of Guadalupe, declared Juan Diego blessed. Pope Saint John Paul II later canonized Juan Diego on July 31, 2002.

Juan Diego was a devout Catholic but a man of no particular prominence in the local society or the Church. He had been living with and looking after his uncle, Juan Bernardino, who was gravely ill.
​
First apparition

On Saturday morning, 9 December 1531, Juan Diego was on his way to church to participate in the Mass for the Solemnity of the Immaculate Conception and in the catechetical instruction which would follow. As he reached Tepeyac Hill, he heard beautiful music and a beautiful voice calling out his name. Our Blessed Mother appeared to him as the “woman clothed with the sun” of the Book of Revelation, pregnant with the Child Jesus. She instructed Juan Diego to go to the house of Bishop Juan de Zumárraga and to request that a chapel be built in her honor on Tepeyac Hill so that she might show the infinite majesty and mercy of God to all His children of America.

Juan Diego went to the Bishop’s house at which he was received with great respect but also with hesitation regarding his story of the apparition and of our Blessed Mother’s request. The Bishop, who was praying and working to bring together the native Americans and the Spanish conquerors and settlers, requested time to consider the matter.
​
Second apparition

On Juan Diego’s return home, the Blessed Mother appeared to him for the second time. Disappointed that he had failed in his mission, he asked Our Lady of Guadalupe to send a more esteemed messenger to the Bishop, so that he would believe the message. Our Blessed Mother instructed Juan Diego to return to the Bishop with her request.
​
Third apparition

The third apparition took place on December 10. Juan Diego had gone to the Bishop for a second time. The Bishop responded by asking for a sign so that he might believe the Blessed Mother’s request. On his way home, Our Lady of Guadalupe appeared to Juan Diego, and he told her of the Bishop’s request of a sign. Our Lady promised to provide the sign for the Bishop when Juan Diego would return to her on the next day.

​Juan Diego missed his appointment with Our Lady of Guadalupe on December 11 because he was looking after his uncle Juan Bernardino who was gravely ill. On December 12, he was hurrying to bring a priest to administer the sacraments to his uncle who was dying. He took a different route in order to avoid another encounter with the Blessed Mother, embarrassed that he had missed the appointment on December 11 and not wanting to be delayed in seeking spiritual help for his uncle.

Our Lady of Guadalupe appeared to him nonetheless, the fourth time, assuring him that his uncle was already cured and instructing him to gather flowers on the top of the hill as a sign to take to the Bishop. Juan Diego trusted Our Lady and found on the top of the frozen and barren hill the most beautiful flowers. He gathered them and Our Blessed Mother arranged them in his cloak, or tilma as it was called. Juan Diego then hurried to the Bishop’s house where this fourth apparition reached its fullness. When he opened his tilma to show the flowers to the Bishop, Our Lady of Guadalupe appeared depicted on the tilma. The Bishop immediately understood the truth of Juan Diego’s message from the Blessed Mother and hastened to have the chapel built on Tepeyac Hill.

​The fifth apparition took place in the little home in which Juan Diego was living with his uncle. Our Lady of Guadalupe appeared to Juan Bernardino and cured him of his fatal illness.

​(Source: Adapted from an article in The Catholic Times on 29 May 1999 by then-Bishop Raymond Leo Burke/Shrine of Our Lady of Guadalupe) Download text and image here. 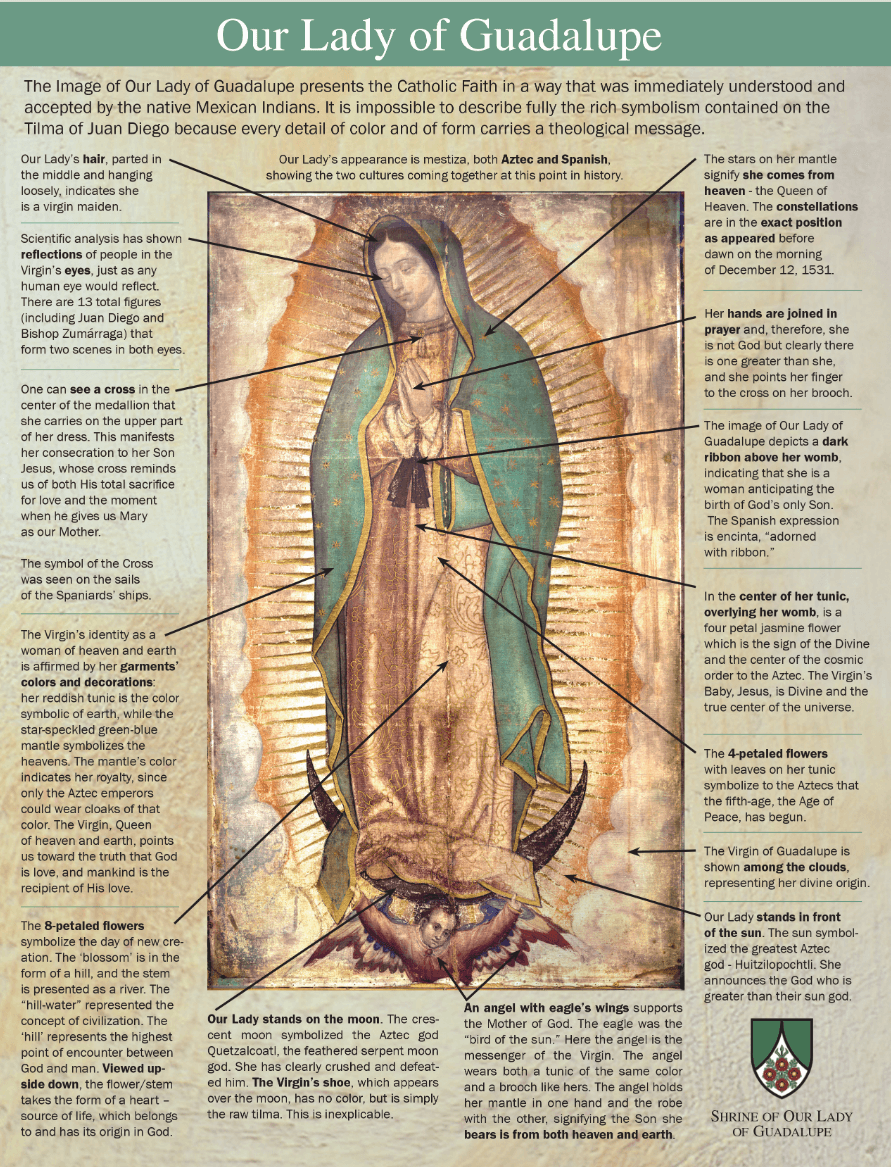