I was delighted to read that 80% of over 50s have refused to have a booster covid-19 jab.

The news suggests that the truth is, at last, leaking out – despite the fact that the mainstream media has for two years been suppressing the truth and demonising the truth-tellers.

I was less cheered to see that someone called Ara Darzi (who is apparently an Iraqi born Armenian who sits in the UK’s House of Lords and is employed at Imperial College in London) has reportedly claimed that ‘antivaxers are a global menace’ and the growing anti-vaccine movement is a threat to public health across the globe.

Imperial College, in case you haven’t noticed, has links to Bill Gates, the unqualified vaccine enthusiast and chum of the disgraced Jeffrey Epstein, and is the home of Ferguson, a mathematical modeller with a slightly less than impressive track record and the man whose absurd predictions about the coronavirus were used as the basis for the fraudulent claims of a pandemic.

Darzi is not alone, of course.

The pro-vax enthusiasts appear to be once again attacking those of us who have been telling the truth about vaccines in general – and the covid-19 jab in particular.

The other day a newspaper called the Financial Times ran an article which included the usual patronising garbage about conspiracy theories being the refuge of the uneducated.

The snide remark about our being ‘uneducated’ is simply abusive. I’d bet that I could find a dozen alleged ‘conspiracy theorists’ with better and more relevant academic qualifications than any dozen journalists working at the FT.

I don’t usually do this but, since the generic and particular abuse just keeps coming, here, just for the record, are quotes about me from the mainstream press in the UK. These quotes come from reviews of my books and articles about me which appeared prior to 2020, before I was deliberately, cold-bloodedly demonised:

‘Vernon Coleman writes brilliant books.’ – The Good Book Guide
‘No thinking person can ignore him.’ – The Ecologist
‘The calmest voice of reason.’ – The Observer
‘A godsend.’ – Daily Telegraph
‘Superstar.’ – Independent on Sunday
‘Brilliant!’ – The People
‘Compulsive reading.’ – The Guardian
‘His message is important.’ – The Economist
‘He’s the Lone Ranger, Robin Hood and the Equalizer rolled into one.’ – Glasgow Evening Times
‘The man is a national treasure.’ – What Doctors Don’t Tell You
‘His advice is optimistic and enthusiastic.’ – British Medical Journal
‘Revered guru of medicine.’ – Nursing Times
‘Gentle, kind and caring’ – Western Daily Press
‘His trademark is that he doesn’t mince words. Far funnier than the usual tone of soupy piety you get from his colleagues.’ – The Guardian
‘Dr Coleman is one of our most enlightened, trenchant and sensitive dispensers of medical advice.’ – The Observer
‘I would much rather spend an evening in his company than be trapped for five minutes in a radio commentary box with Mr Geoffrey Boycott.’ – Peter Tinniswood, Punch
‘Hard hitting…inimitably forthright.’ – Hull Daily Mail
‘Refreshingly forthright.’ – Liverpool Daily Post
‘Outspoken and alert.’ – Sunday Express
‘Dr Coleman made me think again.’ – BBC World Service
‘Marvellously succinct, refreshingly sensible.’ – The Spectator
‘Probably one of the most brilliant men alive today.’ – Irish Times
‘King of the media docs.’ – The Independent
‘Britain’s leading medical author.’ – The Star
‘Britain’s leading health care campaigner.’ – The Sun ‘Perhaps the best known health writer for the general public in the world today.’ – The Therapist
‘The patient’s champion.’ – Birmingham Post
‘A persuasive writer whose arguments, based on research and experience, are sound.’ – Nursing Standard
‘The doctor who dares to speak his mind.’ – Oxford Mail
‘He writes lucidly and wittily.’ – Good Housekeeping

But since February 2020, when I first described the coronavirus story a hoax I have been vilified, damned, lied about and abused by vaccine enthusiasts.

Narrow minded, dismissive, dangerous, abusive and unquestioning nonsense is now commonplace in the mainstream media where anyone questioning the official line is demonised and abused, and inconveniently accurate evidence is dismissed as part of a ‘conspiracy theory’.

During the last couple of years many well-qualified doctors who have spoken out about the truth of the fake pandemic have been professionally destroyed.

The sense of outrage and disgust I felt when I read these latest attacks burnt holes in my soul.

Just look at the evidence proving that the covid-19 pandemic was a fake.

First, in March 2020, the Government’s own advisors officially downgraded covid-19 to the level of the flu. The evidence is on my website. Covid-19 was not a plague. It was and is no more than an over-promoted version of the flu. This fact is rather proved by the fact that the flu disappeared in 2020 and was not seen. There was no pandemic. As I pointed out in my first video ‘The coronavirus hoax’, in March 2020, up to 650,000 people can die of flu in an annual six month flu season.

Second, there is massive confusion among doctors about the PCR test – either through unforgiveable malice or unforgiveable ignorance. Journalists, politicians and doctors assume that anyone with a positive PCR test has covid-19. But the PCR test is utterly unreliable as and for that reason the test has officially been withdrawn in the US. My video entitled `This needs to be stopped now’ which was dated 20th May 2022, contains quotes from just a few of the scientific papers showing that the test has killed people and is utterly pointless. (The video, like all my 300 videos has now been removed from the internet – banned and censored by the conspirators – but the transcript remains.)

Third, the death totals in the UK during 2020 and 2021 were no more than average. Lots of doctors think there were many extra deaths during those years. If they bothered to look at the official statistics they would see that those were average years for deaths. There was no epidemic or pandemic. The same is true of other countries. Again take a look at my websites for the figures.

Fourth, the number of alleged deaths was massively increased by counting as covid-19 deaths people who died ‘with’ covid-19 instead of dying ‘of’ covid-19. If you were knocked down by a bus, and then tested positive for covid-19 and died within 60 days, then you officially died of covid-19. That was a clumsy fraud and if a cheap con man tried a trick like that he’d be locked up.

Fifth, the lockdowns were never useful or necessary. In May 2020 I warned that the lockdowns, introduced to combat the fake plague, would kill far more people than covid-19. The GMC would now find it difficult to find a sane, independent doctor to disagree with that claim.

Sixth, in early 2020 the medical advisors in the UK and US agreed that masks were dangerous and useless and that those who wore them were virtue signalling. They were right, of course. I can provide scores of scientific papers proving the danger of the public wearing masks.

Seventh, thousands of elderly patients were killed in care homes by egregious medical practices which should now concern the GMC. The GMC has ignored those deaths.

Eighth, the closure of hospital departments was entirely unnecessary. The long waiting lists for screening tests and treatment will result in millions of unnecessary deaths. The GMC is doing nothing about the errors – whether through ignorance or malice – which will result in those extra deaths from cancer, heart disease and so on.

Ninth, the uselessness and danger of the covid-19 jab is easy to prove. There is ample evidence available on my websites. Back in the autumn of 2020 I warned about the dangers and the deaths to come. Everything I said has been proved accurate.

Those doctors who spoke out against the fraud were telling the truth. The medical establishment has proved itself to be either woefully ignorant or just plain corrupt.

I challenge Darzi to find one person whose health has been directly damaged by any of the doctors who have spoken out against the covid fraud and who have criticised the covid-19 jabs.

I can, on the other hand, produce evidence that untold thousands of innocents have been killed or made ill by the lies which have been told by those following the official drug company line and by the reckless, endless jabbing of populations around the world.

The mainstream media will ignore this scandal because it is inconvenient and embarrassing.

And finally, here’s the killer evidence that those of us telling the truth are right and the mainstream journalists are wrong.

For two and a half years I have challenged the Government to defend their position in a live, nationally televised debate about covid-19 and the covid-19 jabs.

But no one has had the courage to take up the challenge.

And I am banned from every mainstream media outlet because truth telling is now considered too dangerous.

I am banned from all social media and most of the internet too.

The last time I tried to appear on the radio the link mysteriously stopped working. And, of course, the BBC boasts that it will not allow anyone who questions vaccination of any kind onto of their programmes ‘whether right or wrong’.

So, I challenge any Government Minister or Mr Darzi to a public, live, nationally televised debate about vaccination, about covid and about the covid jab. It must be live. Let’s sort this out now and find out who is telling the truth.

I doubt if they’ll accept the challenge, of course.

I fear that the mainstream media has been instructed to suppress the truth.

And that should tell the undecided everything they need to know.

Meanwhile, I believe there is clear evidence that any doctors or nurses who give or promote the covid-19 jab should be investigated by the General Medical Council.

And, in my view, Imperial College in London should be closed down and its buildings turned into multi-storey car parks so that they can do some public good. 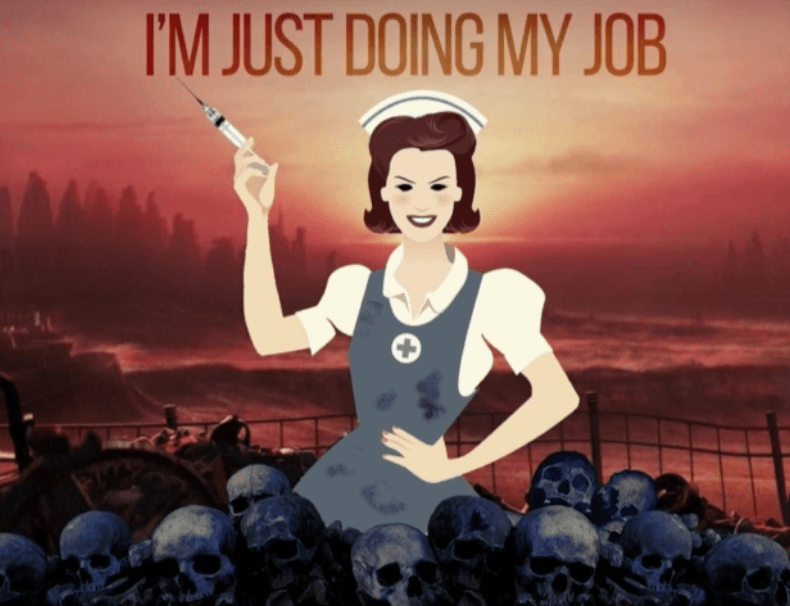