About the UK Prayer Initiative 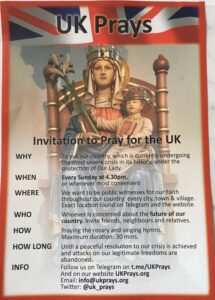 We pray the Rosary for cohesion and reconciliation in society, for peace, and true freedom. We pray for the people, for the rulers, and for the kingship of our Lord Jesus Christ in society. At the same time always for the freedom of the Church, for the clergy, for the bishops, for the Pope, and in reparation for the sins committed against God Almighty and His Holy Mother. In particular, we pray for the Pope to consecrate Russia to Her Immaculate Heart as Our Lady requested in Fatima.

“The Rosary is the ‘weapon’ for these times.” (Padre Pio of Petrelcina)

Holy Rosary Crusade of Reparation—“Do What I tell you, and you will have peace”

Inspired by recent developments in Austria, where a group of faithful are organising weekly, public recitations of the Rosary, a devotion which is rapidly spreading throughout the country (https://oesterreich-betet.at), we wanted to do something similar in the UK.

The Austrian faithful have an encouraging example in their predecessors of the 1950s. Post war Austria was divided amongst the four allied nations and suffered especially in the Soviet controlled area with brutal repressions.

A Fransciscan priest, Father Petrus Pavlicek, was deeply troubled by the situation and sought his refuge in prayer at the National Marian Shrine in Mariazell in 1946, where, in an inspiration, he heard the words: “Do what I tell you and you will have peace.” He saw this in line with the message of Fatima from 1917 where Our Lady encouraged the three shepherd children to repent, do penance and pray, especially the daily rosary, as it was only Our Lady who was able to solve all the problems the world was facing.

From 1947-1955 Fr Petrus organised public rosary processions, encouraged his faithful to say the daily rosary and attend yearly candle lit processions in Vienna. The Chancellors of Austria, Leopold Figl, and later on, Julius Raab, joined in those public processions and urged the faithful to storm heaven with their prayers to free Austria from the allied nations, especially the Soviets. In 1955 their mission was successful and Austria was able to sign the Austrian State Treaty. Austria was the only post World War II country where the Soviets retreated without bloodshed and at such an early stage. Nobody could quite understand how and why this happened.

Theresa Neuman, a German stigmatist, when asked why the Soviets left Austria, replied “Verily, verily, it was the rosaries of the Austrian people.”

Inspired by this event, we want to seek Our Lady’s help and protection also in our current crisis. Our heavenly mother won’t abandon us if we honour her publicly. Let us ask her for our protection with all the confidence we have.