Over 50 poems, short stories and essays from 36 authors of various backgrounds.
The texts in Freedom! encourage you to stand up, believe in life, defend your rights and your children’s and grandchildren’s future. (Published 2021) Buy here

In this book, the founder of the White Rose UK tells us how it all began. The name White Rose (Weisse Rose) originally comes from a German underground group that was dedicated to resisting Nazi terror.
With increasing control measures being forced on people, not only in the UK but all around the world, the newly formed White Rose group found it necessary to speak out, end compliance to senseless and harmful rules, and to inform others about the danger of losing our God-given freedoms – a danger that is becoming more obvious by the day.
What started off as an inspiration in one person and was backed by a few, is now supported by thousands across the UK and overseas.
The book portrays the White Rose UK and the historical Weisse Rose, and also contains reports, reflections, diary excerpts, email exchanges, poems as well as a collection of the leaflets, distributed in 2020 and 2021.
As a valuable addition there are English translations of six original leaflets written by the German White Rose during World War II, that are filled with thought-provoking observations and astounding parallels to what is happening today. (Published 2021) Buy here 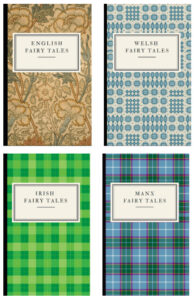 Fairy Tales from the British Isles

Do the English, Welsh, Scottish, Irish, and Manx (Isle of Man) have their own fairy tales? Fairy tales published by the German Brothers Grimm have become world-famous (also because of Disney films), but other countries also have their own tales that deserve attention. In these fairy tale books the reader will find a collection of original English, Welsh, Irish, and Manx (Scottish to follow) fairy tales, collected and edited by editors who lived over a hundred years ago.

These fairy tales of the British Isles are the first group in the series of World Fairy Tales.