From a Life Site News report:

‘British Prime Minister Boris Johnson has signalled that the G7 summit, to be held in Cornwall on the southwestern coast of England from June 11 to June 13, will be a chance for the U.K. to “lead the way” in a worldwide effort to implement an internationally recognized covid vaccine passport scheme.

The summit, supposedly focused on uniting “leading democracies to help the world fight, and then build back better from coronavirus and create a greener, more prosperous future,” will also be used to “agree a common approach to verifying and sharing covid Health Certificates across borders,” the Mail on Sunday reported.

The alleged benefit of an internationally recognized system of vaccine verification is to aid the beleaguered airline industry, hard-hit by lockdown restrictions and travel bans in countless countries across the globe. A summit document seen by the Mail on Sunday alleged that without such a system in place, the industry will become “paralysed” by bureaucracy, adding that an international system to “’verify that people have accurate tests or genuine vaccines” will overcome this apparently severe obstacle.’

‘Describing the notion of vaccine passports as “discriminatory and completely wrong” at the time, Zahawi explained, “while I am aware that other nations may consider immunity passports alongside vaccination, it is my fervent belief that we must not penalize people who remain unconvinced” in taking an experimental jab.

After another month passed, however, in January 2021, Zahawi backtracked, announcing that the government was “looking at the technology.” Though developers of vaccine passport systems began receiving grants from the government to develop the technology, Zahawi insisted that vaccinating would not become compulsory in order to visit private businesses or otherwise engage in normal day-to-day activities. “People have to be allowed to decide for themselves whether they want to be vaccinated or otherwise,” he affirmed.’ 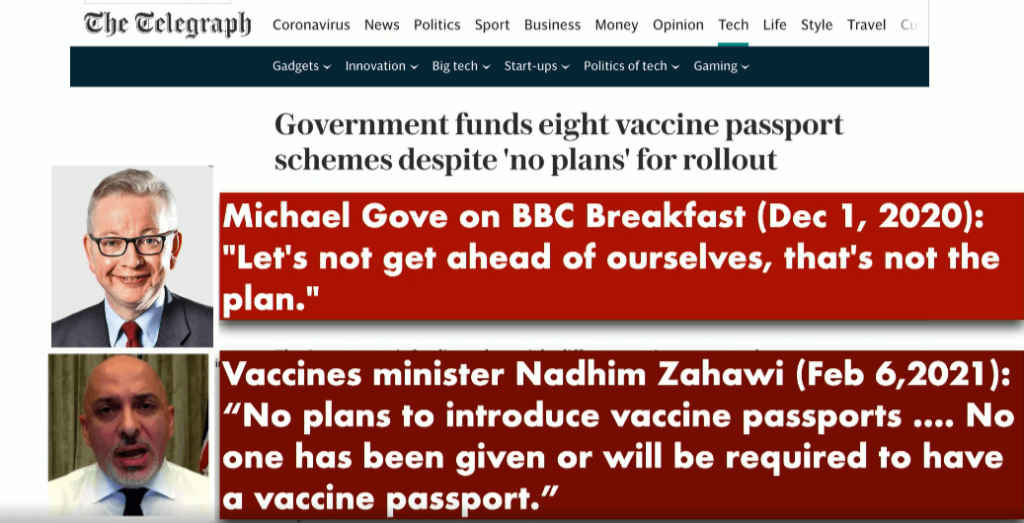 A commenter hits the nail on the head:

This is just another step by the One World Government people to control the world’s population. A virus that only kills 0.01% of those infected does not warrant such panic mongering. Their ulterior motive is glaringly obvious.

Related to this, read: Is This What’s Driving Boris Johnson and Members of the World Economic Forum?

Please check your inbox or SPAM folder for the confirmation email! Please add The White Rose UK to your safe emails. You need to confirm your subscription within 24 hours.

Hand out the leaflets to people on the streets (during protests), put it through their doors or leave in public places (shops, public transport, churches etc.) View all downloads here.

Would you like to support us?  Donate to The White Rose UK. We are grateful for any amount!

Keep warm this winter and support the White Rose UK with this Beanie hat:

Please note that we do not do stickers. There is another group called White Rose on Telegram that distributes stickers, and we are NOT them. Please do not contact us because of stickers. We will ignore emails about the stickers.

If you haven’t got access to the videos on this website, please read this: Can’t Watch Videos?